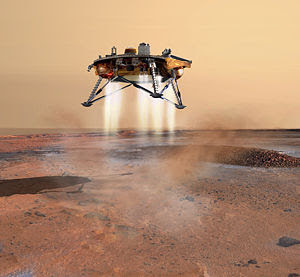 The successful landing of the NASA space craft Phoenix on the planet Mars on May 25, 2008 was accurately predicted on the SAMVA discussion list on the basis of the launch chart (message #15164) and the SAMVA USA chart (#15165). The mission was given a less than 50% probablity of success, hence the prediction was not straight forward. The success of the prediction is not surprising as major achievements in US space flight are explained perfectly well with the SAMVA USA chart.

NATAL POTENTIAL
The SAMVA USA chart reveals well the American technological capabilities, which have been manifested in the USA manned space program. This ability is seen in the strong placement of 10th lord MARS in the 5th house, where it comes under the aspect of 1st lord MOON, giving great fame and identification of the people with such achievements with a sense of pride in the "Yankee know-how". The influence of 6th lord JUPITER on both MOON and MARS (slightly outside standard 5° orb) adds a competitive streak to these activities. So, the natal potential is seen clearly in the chart.

Now below you will see an unmistakable pattern of transit and period influences, that goes well beyond chance, that the SAMVA USA chart is the authentic chart for the USA. In particular, during the following space missions the following aspects were noted:

1. USA becomes second nation to PUT MAN INTO SPACE on 5 May 1961:
Mercury-Redstone 3 was a U.S. Mercury program manned space mission launched on May 5, 1961 using a Redstone rocket, from Launch Complex 5 (LC-5) at Cape Canaveral, Florida. The Mercury capsule was named Freedom 7 and it performed a suborbital flight, piloted by astronaut Alan Shepard—the first American in space. The flight lasted less than 16 minutes and attained an altitude of just over 187 km.
Source: http://en.wikipedia.org/wiki/Freedom_7#Mission_highlights 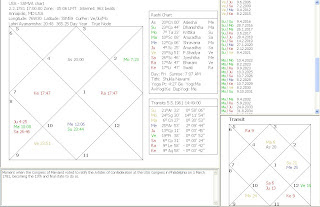 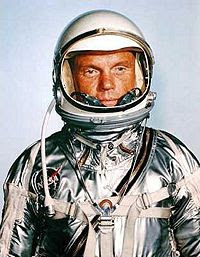 The Mercury-Atlas 6 mission was the first attempt by the U.S. and Mercury program to place an astronaut in orbit. The MA-6 mission was launched on February 20, 1962, from Launch Complex 14 at Cape Canaveral, Florida. The flight used Atlas # 109-D and Mercury spacecraft # 13. The spacecraft was named Friendship 7. It made three earth orbits, piloted by astronaut John Glenn, the first American to orbit the Earth. (The Soviets had already placed a cosmonaut, Yuri Gagarin, in orbit on Vostok 1 in April 12, 1961 and Gherman Titov in August 6, 1961)
Source: http://en.wikipedia.org/wiki/Mercury-Atlas_6 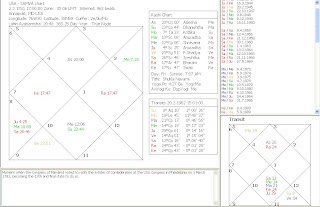 3. USA is first to LAND MEN ON THE MOON on 20 July 1969:
The Apollo 11 mission was the first manned mission to land on the Moon. It was the fifth human spaceflight of the Apollo program and the third human voyage to the Moon. Launched on July 16, 1969, it carried Commander Neil Alden Armstrong, Command Module Pilot Michael Collins and Lunar Module Pilot Edwin Eugene 'Buzz' Aldrin, Jr. On July 20, Armstrong and Aldrin became the first humans to land on the Moon, while Collins orbited above. The mission fulfilled President John F. Kennedy's goal of reaching the moon by the end of the 1960s: "I believe that this nation should commit itself to achieving the goal, before this decade is out, of landing a man on the Moon and returning him safely to the Earth" (1961 speech).
Source: http://en.wikipedia.org/wiki/Apollo_11 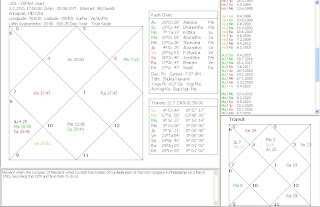 4. THE USA is first to launch (and return) a SPACE SHUTTLE on April 12, 1981:
NASA's Space Shuttle, officially called Space Transportation System (STS), is the United States government's current manned launch vehicle. The winged Space Shuttle orbiter is launched vertically, usually carrying five to seven astronauts (although eight have been carried) and up to 50,000 lb (22 700 kg) of payload into low earth orbit. When its mission is complete, the Shuttle can independently move itself out of orbit (by means of its maneuvering thrusters) and re-enter the Earth's atmosphere. During descent and landing, the Shuttle Orbiter acts as a glider and makes a completely unpowered landing. The first fully functional Shuttle Orbiter was the Columbia, built in Palmdale, California. It was delivered to Kennedy Space Center on March 25, 1979.
Source: http://en.wikipedia.org/wiki/Space_Shuttle_program
The first flight of Columbia (STS-1) was commanded by John Young (a space veteran from the Gemini and Apollo eras) and piloted by Robert Crippen, who had never been in space before, but who served as a support crew member for the Skylab missions and Apollo-Soyuz. It launched on April 12, 1981, the 20th anniversary of human spaceflight, and returned on April 14, 1981, after orbiting the Earth 36 times.
Source: http://en.wikipedia.org/wiki/STS-1 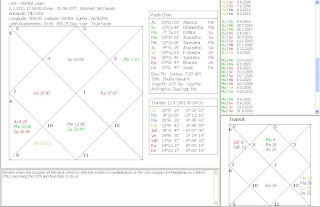 5. US first to land an UNMANNED SPACECRAFT on MARS on May 25, 2008
Phoenix is a robotic spacecraft on a space exploration mission on Mars under the Mars Scout Program. The scientists conducting the mission will use instruments aboard the Phoenix lander to search for environments suitable for microbial life on Mars, and to research the history of water there. The multi-agency program is headed by the Lunar and Planetary Laboratory at the University of Arizona, under the direction of NASA's Jet Propulsion Laboratory. The program is a partnership of universities in the United States, Canada, Switzerland, the Philippines, Denmark, Germany and the United Kingdom, NASA, the Canadian Space Agency, the Finnish Meteorological Institute, Lockheed Martin Space Systems, and other aerospace companies. 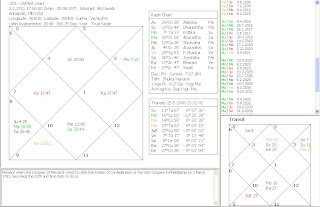 The prominence of transit and natal Mars in the transit dynamics highlights the technical achievement of this landing. As this is a space mission, the influence of 8th lord Saturn suggests the risks involved.

OVERVIEW
As this overview reveals, it is abundantly clear that the SAMVA USA chart shows magnificently these dangerous journeys and great human achievement. In addition to MARS being highlighted indicating courage and technical achievement, and SATURN, signifying death defying acts, the role of MERCURY as 3rd lord of transportation and communication comes out loud and clear.
Posted by Cosmologer at 1:19 AM No comments:

The return of financial volatility 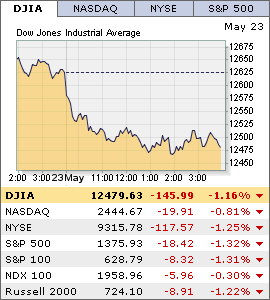 Financial volatility has resumed in the USA.


Earlier this year it was predicted that volatility would characterize financial markets this year. This prediction was based on an analysis of the transit influences of slow moving planets in the SAMVA USA chart.

At the same time, some recovery in investor confidences was expected to take place in early May when 10th lord Mars exited the sign of Gemini and 12th house, after having been there since the autumn of 2007. Indeed, the predicted improvement in confidence did take place at that time as noted by numerous market commentators. 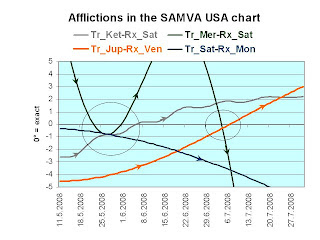 In recent days a moderate bout of volatility has appeared. The volatility was not expected to resume until in the second half of the year.

This has prompted a closer analysis of transit influences in the SAMVA USA chart involving the faster moving planets. Indeed, predicting financial market activity on a day-to-day basis requires a comprehensive analysis including also the fast moving bodies like the Sun, Moon, Mercury and Venus, which is too time consuming to perform for a whole year. 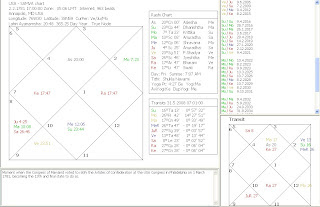 The additional analysis at this time reveals that transit Mercury as 3rd lord of courage and enterprise in the chart is going retrograde around 27° 30' Taurus and 11th house. In that placement Mercury is under the exact afflicting aspect of natal 8th lord Saturn and transit Rahu at 27° 40' Capricorn and 7th house, placing a strain on the indications of Mercury and disturbing the stock market sentiment. This aspect, which began after mid May, peaks towards the end of the month and ends around June 10th. Another aspect involves transit Ketu at 27° 41' Cancer and 1st house, which is now closely aspecting natal 8th lord Saturn at 26° 47' Scorpio and 5th house. Even if Ketu is moving at normal speed at this time, its aspect to Saturn can create sudden upsets. Further, transit Saturn is at 8° 06' Leo and 2nd house, from where it is aspecting natal 1st lord Moon at 7° 25' Taurus in 11th house. This aspect has a negative effect on the American sense of self. The rising oil prices (Saturn) are leading Americans to reevaluate their lifestyle (1st house). This was highlighted when Barack Obama recently commented in Oregon that he doubted the rest of the world was happy with the widespread reliance of Americans on fuel intensive SUVs for transportation. 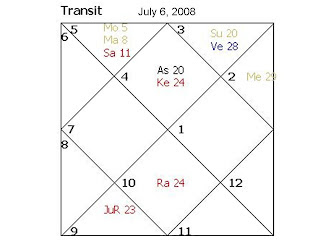 The important thing to note is that these aspects will be felt until around June 10. However, at that time, the applying aspect of transit retrograde 6th lord Jupiter at 28° 02' Sagittarius and 6th house to natal 4th lord Venus at 23° 51' Sagittarius will begin to be increasingly felt. This aspect comes within 2° orb around 20 June and peaks on July 7th. This aspect is expected to increase tension concerning communal harmony and the housing market. It could also be associated with earthquakes and extremes in weather.

Finally, around 20 June another difficult aspect would begin to be felt, the conjunction of transit Rahu with natal 2nd lord Sun at 23° 44´ Capricorn and 7th house. This aspect will become stationary within 1° orb from 17 July and will not clear until in mid October. It is expected to produce difficulty for the US Presidency (Sun). One possible manifestation is a scandal involving the US government covertly financing foreign governments to ensure their assistance in the fight against terrorism. This aspect, which also represents an affliction of the 2nd lord of wealth, would also be disturbing for the financial markets.

In summary, the prediction for easier conditions in the financial markets in May and June will likely be more short lived than earlier thought. It has earlier been predicted, based on transit and period influences in the SAMVA USA chart, that the financial volatility would resume in the second half of the year. This prediction is now being slightly revised. The financial markets are now expected to remain volatile for the remainder of the year.
Posted by Cosmologer at 10:59 AM No comments: