The banking crisis of 2008 and the SAMVA USA chart 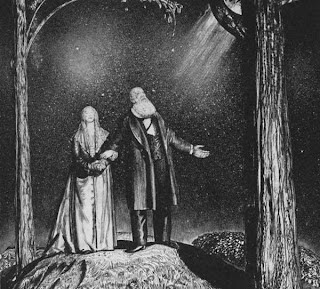 A moment of truth has descended on the US banking system. After many years of marketing and selling highly risky debt, the banks are feeling the heat from a lack of funds. Over the past year, the financial market has been coming to terms with this situation. There have been recurring bouts of anxiety with share price declines. All the while uncertainty about the severity of the situation has been growing. Initially, the concerns were about the bank profitability, but more recently, with a dimming outlook for the economy, the concerns have shifted to their solvency. At its root, the situation is traced to loan losses in the housing market linked to falling house prices. The uncertainty of the extent of the problems has begun to hamper the pricing of risk- the banks won't lend at any price. The US central bank, the Fed, has poured money into the financial system to little avail as banks seem reluctant to lend out the money, including to one another. People are reluctant to borrow to buy homes in a declining real estate market. The growth of consumer credit has slowed since the autumn of 2007. A tendency to limit the supply of credit would have ramifications for economic growth and employment going forward.

However, the situation went from bad to worse on Friday March 14, 2008, when it became clear that major bond investors had begun to pull their money out of Bear Sterns, a major investment bank in New York with a prestigious history. Over the weekend it was clear the bank had collapsed and needed to be rescued. On Monday, word broke of its acquisition by JP Morgan with the financial backing of the Federal Reserve. As a result, its share price collapsed by 90% at the open. This had a knock on effect on other investment banks, and the share price of Lehman Brothers hit the skids, declining by 20% at the close, although it went as far down as 40% during the session. This article offers an overview of the astrological dynamics that explain this crisis in terms of the SAMVA USA chart and what it is likely to mean for the US and global economy. 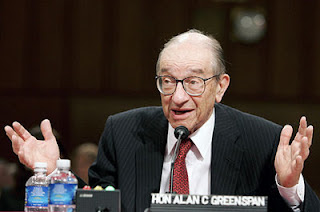 As before, the SAMVA USA chart perfectly explains the financial market developments.

Between 1996 and 2016 the SAMVA USA chart is running the major period of Venus. As lord of the 4th house, Venus rules fixed assets or housing. Hence, during its period these matters become important. Moreover, as Venus is badly placed in the 6th house, a dusthana (malefic) house, its strength is halved. This means that its ability to defend its indications is reduced and setbacks are likely during periods of transit afflictions. As the 6th house is an indicator of financial stability (the ability to deal with debt) the issue of mortgage debt and its impact on financial stability would become an important feature of the period. An additional factor to consider is that in the chart, the functional malefic Ketu (the Moon’s south node) is conjunct the most effective point of the 4th house, afflicting its indications. When the influence of Ketu is present, it brings the energy of separation to the fore. It can also produce sudden, violent and even explosive developments. The functional malefic Rahu (the Moon’s north node) is conjunct the most effective point of the 10th house, which rules trade with foreign countries. From there rahu afflicts also the 2nd house of wealth and the 6th house in the chart.

Rahu can cause manipulation or deception in order to gain desires. This malevolent energy is therefore potentially affecting the financial stability of the country. We see this in the fact that the marketing and sale of toxic sub-prime mortgages in the USA and around the world originated on a massive scale in the Rahu sub-period (2003-2006) [1]. 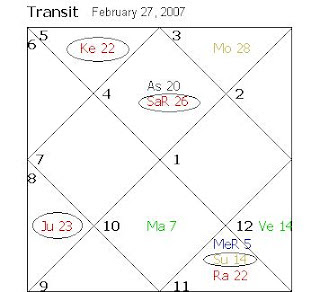 Jupiter as 6th lord rules over financial stability in the chart. It seems that an awareness of the problems began to emerge after the onset of its sub-period, which runs from June 2006 to February 2009. In the Autumn of 2006, the IMF issued a veiled warning about the dangers of exotic mortgages in the USA. It was in early 2007 that the housing crisis burst on the scene when transit stationary Ketu at 23° Leo and the 2nd house afflicted natal Venus at 24° Sagittarius in the 6th house.

Currently the sub-period lord Jupiter at 24° Sagittarius is afflicting the natal Venus. Moreover, transit Venus is 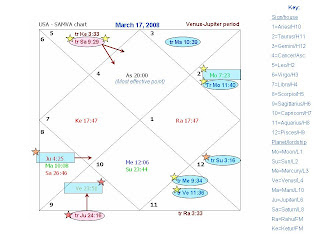 currently badly placed in the 8th house of obstacles and endings, along with 3rd lord Mercury. These aspects are further weakening conditions in the housing market and banking. In fact it is declining housing prices which are at the root of the present financial problems in the USA. The transit of 2nd lord Sun through the 8th house in the past month added to the weak conditions in the country with regard to these issues. As mentioned in early 2008 the troublesome transit of Mars in Gemini will be running until late April undermining the confidence of market participants.

Already taking place and reaching full impact in early May 2008 is another difficult aspect, or the affliction of natal 1st lord Moon in Taurus and the 11th house by transit 8th lord Saturn. This aspect is likely to keep things difficult with regard to the strength of the US dollar as well as the aspirations and self-image of the USA.
Despite all of this, things are expected to improve in May and June, after Venus and Mercury emerge from Aquarius and the 8th house and Mars comes out of Gemini and the 12th house. At that time, confidences should begin to recover, but it will be a some time before the investor spirits are quite normal again. As mentioned earlier, the second half of 2008 will not be easy, given the afflicting aspects in the chart.

Numerous predictions have been made on the basis of the SAMVA USA chart about continued volatility in the US financial market in 2008. These predictions have all come true. Looking forward we can note that transit Jupiter will enter its sign of debilitation in late 2008 and will a year later enter the 8th house. These placements are not helpful for financial stability. In other words, the outlook for the economy is not very good for the next few years. The dynamics will also shift in the sub-period of Saturn as 8th lord from February 2009. The conditions in the US economy have ramifications for economic growth around the planet. Saturn natally afflicts the 2nd lord of wealth, Sun, in the SAMVA USA chart, such that it can both confer easy gains or lead to losses of wealth. At the beginning of the Saturn sub-period, a difficult aspect will be coming to an end involving the affliction of natal Saturn to transit Saturn (Nov '08-Feb '09). This transit can bring violence and problems for easy gains or wealth. Finally, as the Venus period lasts until 2016, the issues having to do with housing and financial stability will continue to be felt for some years. However, it is likely that the major difficulty will be experienced in 2008, while the Jupiter sub-period is still operating. This is because of the natal link between Jupiter and Venus, due to the placement of Venus in the sign Sagittarius, owned by Jupiter. The Sun period from 2016 will restore the might to the USA.