Predictions for the USA in 2011 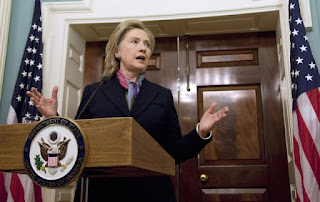 In this article are presented some predictions the USA in the coming year based on the 20° Cancer rising SAMVA USA horoscope. A review of the main planetary placements and transit-to-transit aspects is followed by a discussion of placements by house and transit-to-natal aspects and what to expect for the USA. Of note are afflictions involving Saturn in the first part of the year while the nodes afflict at the end of the year.

Period influences in 2011
The US will continue to run the Venus major period and Saturn sub-period in 2011. As such, we can expect similar trend influences (not the same as signficant events, which are linked to transits) to what has been seen so far since February 2009 and what was seen during the earlier such period from February 1889 to April 1892. The Venus major period tends to bring strains or setbacks to the indications of Venus as 4th lord, including communal harmony, fixed assets and natural resources. The Saturn sub-period places emphasis on the general and functional indications of Saturn as 8th lord. It's period tends to bring slow progress in the national affairs, with emphasis on old things, mining from deep within the ground, working people and civil servants. Of the functional indications of Saturn, we can expect issues of importance to include the masses and their beliefs, obstacles and accidents, easy gains and natural disasters. As Saturn is placed in the 5th house, the above indications tend to be expressed in areas such as universities, children, creativity, speculation and emotional stability.

Transit influences in 2011
We can begin by noting the beginning and ending placements of the planets in 2011 and how many signs they will pass through during the year.


Of the faster moving planets, only Mercury will go briefly stationary several times in 2011: at 0° Aries in the last week of March, 21° Pisces in the third week of April, 5° Leo in the last week of July, 28° Cancer in the third week of August, 22° Scorpio in the third week of November and 14° Scorpio in the second week of December. For the USA, Mercury is 3rd lord of communication, initiative and courage, placed in the 7th house of others and foreign policy. As such, Mercury is strongly linked to the emphasis of freedom of speech and action in US life. During its periods, the US has engaged in either difficult efforts to ensure the rights of underpriviliged segments of society or the freedom of action at home or abroad. The time in mid April would be good for the indications of Mercury, as it will be in the MEP of the 9th house of luck, aspecting its own indications. However, it will also be conjunct 6th lord Jupiter, bringing controversy. Look for news at that time about such indications having positive outcomes amidst controversy. 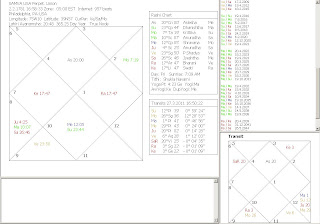 Of relatively greater import is the movement of the slow moving planets. The stationary periods of the slow moving planets are important, as their energy becomes focused on specific degrees of the zodiac for several months at a time. A major aspect at the outset of the year involves the stationary conjunction of Saturn at 23° Virgo with the MEP of the 3rd house of communication, from where it also aspects the 5th house (Scorpio), 9th house (Pisces) and 12th house (Gemini). The conjunction of Saturn and the 3rd house MEP became exact on November 20, 2010, when strains from impending leaks from Wikileaks caused considerable stress for US diplomacy and then the leaks began to pour out and embarrass from late November. In December 2010, weather problems disrupted travel in the country.
In early 2011, the orb of the conjunction has widened but is still well within in the 5° orb. Morevoer, as Virgo is a Moolatrikona sign, owned by Mercury, the indications of the 3rd house are expected to become more vulnerable to strains and setbacks associated with the conjunction when Mercury becomes weak or afflicted in transit. With the exception of the first half of February, Mercury will be weak in transit until mid May. The fact that Saturn will remain in the MEP of the 3rd house until May, as sub-period lord, suggests ongoing strains linked to the indications of the 3rd house, especially when transit 6th lord Jupiter begins to oppose transit Saturn in the second half of March and first half of April 2011, around 20° Virgo and Pisces. The strains at that time may concern such things as the communication of the government or the US diplomatic corps. Saturn also tends to slow things down, bringing soberness and structure. US media is likely to feel the chill winds of this transit, most likely traditional print media. From May into July 2011, Saturn again becomes stationary at around 17° Virgo, aspecting also this degree in Scorpio, Pisces and Leo. As there are no planets in these degrees in the SAMVA USA chart, the problems associated with Saturn are expected to be less at that time.

Lord of controversy
As Jupiter is 6th lord, its placement tends to bring controversy to the indications of things it touches. In Pisces and the 9th house, the controversy relates to e.g. the judicial system, philosophical outlook and foreign affairs. Transit Jupiter begins the year in mutual aspect to its own natal placement. This aspect, which peaks on January 13, suggests scope for accidents, controversy and conflict. Fortunately, transit Jupiter is well placed in Pisces and the 9th house of fortune, reducing the harmfulness. In the final week of April, transit Jupiter will aspect natal Saturn, suggesting controversy for the indications of Saturn. It is also an aspect that suggests violence. Fortunately, the aspect is not stationary and thus its influence will not be felt for long. . 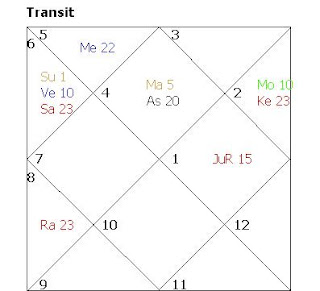 Jupiter becomes stationary at 15°-16° Aries during August and September 2011. From there it aspects the same degrees in Leo, Libra and Sagittarius. Importantly, at this degree, Jupiter will be conjunct natal Rahu, suggesting controversy involving the exposure of manipulations in such areas as government administration, foreign trade, Congress and the enactment of laws, potentially affecting also religious and judiciary institutions. Jupiter will also be opposite Ketu, suggesting scope for violent accidents that disturb the communal harmony, more so when other afflictions co-exist. 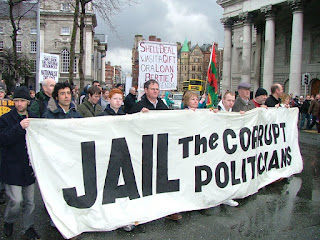 Of the four slow moving planets, three will change signs in May 2011. Such a change of signs by several slow moving planets signals important trend changes in the national affairs, linked to matters indicated by these planets and in the respective signs and houses. Jupiter will exit Pisces and enter Aries on May 9th. In this regard, we could note that Jupiter is relatively well placed in both Pisces and Aries. That said, the problems would become less for e.g. the diplomatic corps but greater for the government and Congress. Rahu will leave Sagittarius and enter Scorpio on May 4th, when also Ketu leaves Gemini and enters Taurus. Rahu and Ketu are debilitated in the signs of Scorpio and Taurus, respectively. As such, transit afflictions involving the nodes in these signs would be expected to be more difficult than otherwise. The transit of the nodes in debilitation would be expected to bring problems e.g. for incomes and speculations.
On November 11, 2011, Saturn ends its two and half year sojourn of Virgo and 3rd house and enters Libra and 4th house. While Saturn becomes exalted in Libra, which would be good for its indications, it becomes weak due to the bad placement of natal Venus in the SAMVA USA chart. In early Libra, Saturn does not afflict other planets in the horoscope for the remainder of the year. 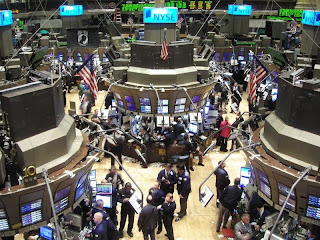 The retrograde moving nodes, which become stationary three times a year, begin the year stationary with Rahu at 8° Sagittarius and the 6th house and Ketu at 8° Gemini and 12th house in the SAMVA USA chart. Rahu brings materiality, manipulation and crisis to those things it touches on, while Ketu brings sudden violent or separating events. As the nodes are not afflicting in the SAMVA USA chart in early 2011, such influences are not especially pronounced due to their transit placement. However, this transit suggests difficulty for the indications of the 6th and 12th house, but this was more so in 2010 when the nodes moved through the MEPs of these houses. After the nodes change signs, they again become stationary at around 29° Scorpio and Taurus from early May and into July 2011. After gaining normal speed and moving from there Rahu becomes conjunct natal Saturn at 27° Scorpio (and Ketu opposes it). This suggests briefly increased difficulty for the indications of Saturn during August, especially towards its end. In the second half of September, transit Ketu will aspect transit 8th lord Saturn in the MEP of the 3rd house and natal 2nd lord Sun in the 7th house. This could be a stressful time for the US President. Adding to the tension in the late Summer and early Autumn would be the conjunction of transit 6th lord Jupiter and the natal nodal axis. 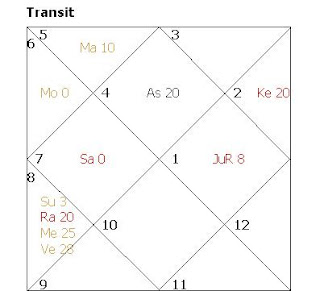 From October through December, the nodes again become stationary at around 20° Scorpio and Taurus, from where will be exactly conjunct the MEPs of the 5th and 11th houses. This suggest strains for the indications of these houses and the other odd numbered houses. Out of these, the 1st house (Cancer) ruled by the Moon and the 3rd house (Virgo) ruled by Mercury become more vulnerable when the Moon and Mercury are weak or afflicted in transit.

In sum
The economy will continue to grow but in a sluggish manner. The obstructing influence of Saturn in the 3rd house of communication will continue to be strongly felt in the first half of 2011. In middle of the year, Jupiter will bring out controversy and conflict affecting the US government and communal harmony. From the Autumn months, and notably towards the end of the year such indications as incomes, friendships, speculation, financial markets, university life and children are likely to become disturbed, as well as problems in transportation and some crisis regarding the image of the country.
Posted by Cosmologer at 5:06 AM 2 comments: