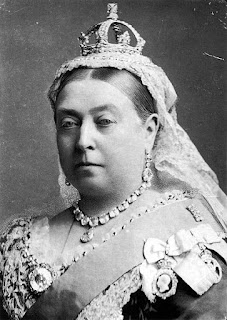 One episode in British history serves to remind of the Victorian morality that reigned supreme over one century ago. The social ethic emphasised values espousing sexual restraint, low tolerance of crime and a strict social code of conduct. The Victorian period is considered to have ended with the death of Queen Victoria in 1901. A signal event at the end of this period was the trial and imprisonment of author Oscar Wilde on charges of "gross indency." In particular, the episode shows the effort of upper class individuals and the authorities to rid the country of tendencies considered gross and indecent. It is also fascinating that one of the most famous and certainly the most witty literary person of his time was at the center of the case. 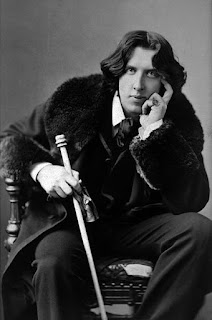 Oscar Wilde was born on 16 October 1854 and died on 30 November 1900. He was an Irish writer and poet. After writing in different forms throughout the 1880s, he became one of London's most popular playwrights in the early 1890s. Today he is remembered for his epigrams, plays and the circumstances of his imprisonment, followed by his early death.

At the turn of the 1890s, Wilde refined his ideas about the supremacy of art in a series of dialogues and essays, and incorporated themes of decadence, duplicity, and beauty into his only novel, The Picture of Dorian Gray (1890). The opportunity to construct aesthetic details precisely, and combine them with larger social themes, drew Wilde to write drama. He wrote Salome (1891) in French in Paris but it was refused a licence. Unperturbed, Wilde produced four society comedies in the early 1890s, which made him one of the most successful playwrights of late Victorian London. 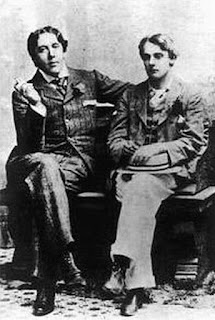 On February 14, 1895, Oscar Wilde's last play, the comedy The Importance of Being Earnest, was premiered at St. James' Theatre, London. This was at the height of Wilde's fame and success, when he was the toast of London. But Wilde also had a secret. The Marquess of Queensbury had become angry when he found out that Wilde had taken his son, Lord Alfred Douglas, as a lover. On February 18, Queensbury left his calling card at Wilde's club, the Albemarle, inscribed: "For Oscar Wilde, posing somdomite[sic]". Wilde, egged on by Douglas and against the advice of his friends, initiated a private prosecution against Queensberry in March, to clear his name. As a result, Margeuess Queensbury was arrested on a charge of criminal libel: as sodomy was then a crime, Queensberry's note amounted to a public accusation that Wilde had committed a felony. Queensberry could avoid conviction for libel only by demonstrating that his accusation was in fact true.

During the trial, with the help of private investigators, Queensbury allegations were in fact proved true, making Wilde a felon. Queensberry won a counterclaim against Wilde for the considerable expenses he had incurred on lawyers and private detectives in organising his defence. Wilde was left bankrupt; his assets were seized and sold at auction to pay the claim. After Wilde had lost his libel case against the Marquess, the government had no option but to initiate a case against him and on April 6 Wilde was arrested at the Cadogan Hotel, London, for gross indecency. For several weeks the whole country was caught up in news of the most spectacular trial of its time. The facts were stacked against Wilde and on May 25, 1895 he was convicted of gross indecency with other men and taken to Pentonville Prison to begin his two years' sentence of hard labour. While in prison, Wilde wrote De Profundis in 1897. It was first published in 1905, a long letter which discusses his spiritual journey through his trials, forming a dark counterpoint to his earlier philosophy of pleasure. 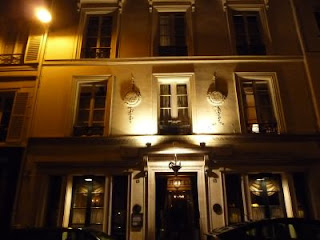 Upon his release Wilde left immediately for France, never to return to Ireland or Britain. There he wrote his last work, The Ballad of Reading Gaol in 1898, a long poem commemorating the harsh rhythms of prison life. His final years were spent in the Hotel d'Alsace in Paris, where he died destitute at the age of forty-six.

An interesting anecdote is that after Wilde's death, Lord Alfred Douglas married and had a son. After the Rahu period ended and the Jupiter major period began, Lord Alfred Douglas denounced Wilde at a trial in 1912, describing him as "the greatest force for evil that has appeared in Europe during the last three hundred and fifty years". Douglas added that he intensely regretted having met Wilde, and having helped him with the translation of Salome which he described as "a most pernicious and abominable piece of work".

Astrology of the case
On December 28, 1892, the 18 year Rahu major period commenced in the 16° Virgo rising horoscope for the Union of Great Britain and Ireland. The Rahu sub-period operated until September 10, 1895. According to astrological theory, the Rahu energy is especially pronounced in the national life during the Rahu-Rahu period. To understand these events in terms of the chart it is useful to review the meaning of this planet. On Yournetastrologer.com, Rahu is described thus:

As regards its mundane signfications, it is described thus:

Natally, Rahu is placed in the 7th house, suggesting disturbances related to such indications as pleasure and amusement resorts, tourism, bond of relationships amongst masses and business establishments, foreign affairs and agreements. Rahu aspects Mercury, which is 1st lord placed in Scorpio and the 3rd house. The 1st house rules

the conditions of the country as a whole, PEOPLE AND THEIR GENERAL OUTLOOK, STATE OF LAW AND ORDER, public health, GOVERNMENT, REPUTATION, valor and its position in the world.

While the 3rd house rules

The above suggests some manipulation involving the 7th house of significant other involving the national identity, communication, etc.. The 3rd house also has to do with authors, literature and literary persons. Clearly, the case revolved around Victorian ethics concerning sexual relations and the British identity. Moreover, as the Rahu period had begun in 1892, we can infer that the Victorian morality had begun to crumble before Queen Victoria died. Oscar Wilde's case undoubtedly represented a significant blow to these values. However, more is needed to explain the event itself, the transit of planets in the chart. Importantly, the aspect of a transit stationary Rahu to a weak natal placement is expected to bring a crisis to the affected indications.

Another interesting feature of the Rahu period is that Britain was engaged in numerous acts of foreign policy manipulation, consistent with Rahu in the 7th house. Literary fiction also flourished during those years, with Arthur Conan Doyle introducing his work on the famous private investigator, Sherlock Holmes, in 1893. H.G. Wells published The Time Machine in 1895 and Anthony Hope's novel The Prisoner of Zenda became famous. Rudyard Kipling's The Jungle Book emphasising the splendors of the Indian jungle was published. George Bernard Shaw debuted his play Arms and the Man.

Transits behind this significant event 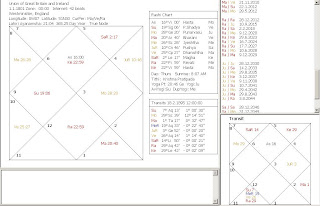 In the 16° rising Virgo horoscope for the UK, transit Mars as 8th lord of obstacles and endings was in early Taurus in aspect to natal Saturn as 6th lord of enemity in the 12th house of losses, when Marquees Queensbury made his public accusation against Wilde. Transit Mars had moved to an opposition of 1st lord Mercury in the 3rd house when the case was brought against Wilde. Moreover, transit 6th lord Saturn was stationary at 15° Libra and conjunct the most effective point of the 2nd house of family, when the case began. It was, however, the transit station of Rahu at 29° Aquarius and the 6th house of court cases that the two cases were held. This is more important, as Rahu at that degree closely aspects the Moon as 11th lord of ideals. The Moon also represents the queen in the heavenly cabinet. The Moon is also linked to the royal family in the UK, being placed in the 10th house in a state of weakness, representing the declining influence of the monarchy. It is therefore no surprise to see a connection between this case and the morality of the country linked to Queen Victoria.

The forthcoming Rahu period
The UK is an national entity that dates back to midnight on January 1, 1801 in London. The Vimsottari dasa-bukhti periods turn one whole cycle every 120 years. The 1890s brought the first major and sub-period combination involving Rahu. The next Rahu major period is due to begin on December 28, 2012 and last until December 28, 2030. We could expect some events to occur during this period that again bring out strongly the indications of these placements in the national life. However, a lot depends on the transits involved.