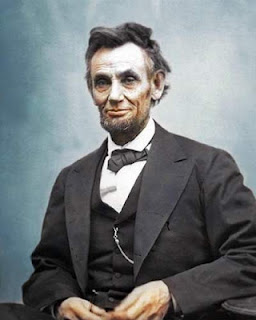 This year has witnessed a revival of interest in President Abraham Lincoln. This is likely due to President Obama‘s effort to align his Presidency with the legacy of Lincoln. A major motion picture about Abraham Lincoln, starring Daniel Day-Lewis, has just come out. It is directed by Steven Spielberg.[1]
There has been much speculation of Abraham Lincoln‘s horoscope, with a number of ascendants proposed for him. In this article it is shown how the sign Aquarius (in the sidereal zodiac) resonates best with the man and his life, based on the historical evidence for his birth time and the horoscopic astrology of the Systems' Approach.

Most historical sources agree that Abraham Lincoln was born around sunrise on Sunday, February 12, 1809 on Sinking Springs Farm near Hodgenville, Kentucky (37° N 32' 85° W 44‘).

"There was a neighborhood picnic in the woods of the Richard Creel (sic) place, in the summer of 1861, and the lunch baskets were assembled at the Sinking Spring....Aunt Peggy Walters was a woman of character, related to half the people present, and her word had weight. 'Wasn't you here when he was born, Aunt Peggy?' asked one of the younger women. 'I most certainly was,' replied Aunt Peggy, 'and I remember it just as well as if it had been yesterday.'... ' I was twenty years old, then, and helping to bring a baby into the world was more of an event to me than it became afterward....It was Saturday afternoon, I remember, when Tom Lincoln sent over and asked me to come, and I got up behind the boy that rode across to fetch me, and I rode across to the cabin that then stood here. It was a short ride, less than a mile. It was winter, but it was mild weather, and I don't think there was any snow....Well, there isn't much that a body can tell about things of that kind. Nancy had about as hard a time as most women, I reckon, easier than some and maybe harder than a few....The baby was born just about sunup, on Sunday morning. Nancy's two aunts took the baby and washed him and dressed him, and I looked after Nancy. That's about all there is to it."

Sandburg (1954) also recounts how Dennis Hanks, the 9 year old cousin of Lincoln‘s mother, and others, corroborate that the birth took place in the morning, around sunrise. On that date and in that location, sunrise occurs at 7:38 am (-5:00 EST). Using LMT (-5:43), sunrise occurs around 6:55 am. 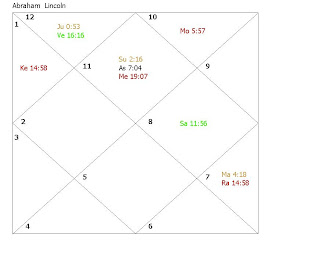 Aquarius been rectified as the sign in the ascendant for Abraham Lincoln with the 7° 04 rising. This is consistent with a time of 7:11 am (LMT). The astrological basis for this horoscope is quite clear, as brought out by a reading of the natal potential in his horoscope and an analysis of the period and transit influences in significant events of his life.
According to astrologer and author V.K. Choudhry

"Aquarius is an airy sign ruled by Saturn, the significator of dutifulness and responsibility. These factors render the Aquarians independent and prepared to go against the established ways of behavior, if they feel that in doing so they are morally correct."

Lincoln spoke out against slavery during his political life.


"If Saturn and the Moon are strong, the Aquarians enjoy good health."

Lincoln‘s Saturn is strong but Moon is weak and badly placed. Moon rules the mind. Lincoln suffered from depression in his early 30s.


"Aquarius signifies characteristics like honesty, ideals and sensitiveness, etc. depending upon the strength of Saturn in the nativity."

Indeed, Saturn is strong and Lincoln is perhaps the most idealistic President in US history, while also being quite pragmatic.
The body description also resembles Saturn i.e.


"...long stature, thin body and with prominent veins if Saturn is strong."

Lincoln was indeed of tall and lean build, also on account of Sun being placed in the most effective point (MEP) of the ascendant, which rules the body and self.

"Aquarius are known to be active, industrious, deliberative, leaders of non-affluent sections of the society, willing to serve, helpful, with initiative, persevering and concentrated in work, courteous, full of new ideas, decisive, humane, intuitive, scientific, studious, sympathetic, talented and unconventional."

Certainly, among the many ascendants, this one seems to resonate most accurately with what we know of this great man. Aquarius explains his swarthy complexion and rugged but gaunt features.

Natal potential
The ascendant degree at 7° ensures that 1st lord Saturn is well placed and strong in MEP of 10th house of career indicating identification of self with a role in public life and success there from.
Sun as 7th lord of spouse is well placed but infant in the MEP of the 1st house. This placement added to the tall height of Lincoln who towered over his contemporaries. Sun is also a general indicator of father. Although reduced in power (40%) the Sun favourably aspects his 1st house of self and 7th house of spouse. Lincoln was diplomatic in his dealings with other and a considerate husband. Lincoln married Mary Todd in his 30s and had three sons by her. She was of a vulnerable emotional disposition and Lincoln had to help her cope with the setbacks in life.
Moon as 6th lord of health, conflict and financial stability is badly placed in and afflicts the 12th house of losses. This is a difficult placement. Moon is also general indicator of mother. He lost his mother from illness when he was only 9 years old. The placement also suggests losses associated with e.g. long standing public policy disputes. This placement, along with the more helpful placements of the Sun and Jupiter, explain why Lincoln became a lawyer. During his adult life Lincoln struggled valiantly for such causes as the emancipation of the slaves and the denial of secession by the Confederate States. Ultimately he gave his life after having succeeded in those efforts.
Venus as 9th lord of luck and father is exalted and strong in the 2nd house of status, family and wealth, promising luck in these areas of life.
Lincoln also had Jupiter as 11th lord of hopes, older brothers and income in infancy in the 2nd house. This placement made Lincoln vulnerable to setbacks in these areas. Jupiter is also indicator of male off-spring. Lincoln had three sons and lost two in their infancy. His eldest son survived his father but did not have off-spring of his own.
Mercury as 8th lord of obstacles and endings is well placed and strong in the 1st house. Lincoln was a man of impressive physical strength.
Mars as 3rd lord of communication and leadership was well placed in the MEP of the 9th house making Lincoln an energetic and visionary leader and impressive orator, linking his ideas to the noblest of ideals. Mars has nearly full strength (85%) as 3rd lord and thus its aspect to the 9th, 12th, 3rd and 4th houses helped their indications. He was high minded and was able to soothe the troubles of others.
Ketu in the 3rd house made Lincoln‘s voice high pitched but his oration nevertheless had a captivating quality.

“Lincoln’s voice, as far as period descriptions go, was a little shriller, a little higher,” says Holzer. It would be a mistake to say that his voice was squeaky though. “People said that his voice carried into crowds beautifully. Just because the tone was high doesn’t mean it wasn’t far-reaching,” he says. When Holzer was researching his 2004 book Lincoln at Cooper Union, he noticed an interesting consistency in the accounts of those who attended Lincoln’s speaking tour in February and March 1860. “They all seem to say, for the first ten minutes I couldn’t believe the way he looked, the way he sounded, his accent. But after ten minutes, the flash of his eyes, the ease of his presentation overcame all doubts, and I was enraptured,” says Holzer. “I am paraphrasing, but there is ten minutes of saying, what the heck is that, and then all of a sudden it’s the ideas that supersede whatever flaws there are.” Lincoln’s voice needed a little time to warm up, and Holzer refers to this ten-minute mark as the “magical moment when the voice fell into gear.”[2]

Rahu in the 9th house, and along with weakness of Sun, suggests difficulties for the father. Indeed, Lincoln‘s father became a widower and had to remarry. He was an early pioneer and life must have been challening for him to feed, clothe and provide shelter for his family.

Lincoln is described as a great leader who met the exigencies of his time with conviction while doing it in such a way as not to offend those he dealt with. Rather, he tended to inspire the people around him. Former political adversaries, who had great personal ambitions and considered themselves every bit his match prior to him becoming President, soon realised his outstanding qualities and submitted to his leadership.  As President, Lincoln took decisions that involved sacrifice and involved tragedy for the sake of preserving the Union and stamping out slavery. In the outstanding book "Team of Rivals: The Political Genius of Abraham Lincoln“ Doris Kearns Goodwin brings out his natural and selfless leadership qualities which compelled earlier adversaries to follow his lead. This is a rare quality and one that only outstanding leaders possess.
Despite these qualities, Lincoln had to endure obstacles in his path to power.
What makes an outstanding personality like Lincoln that helps his country through its most difficult period. The following placements are likely the key influences.