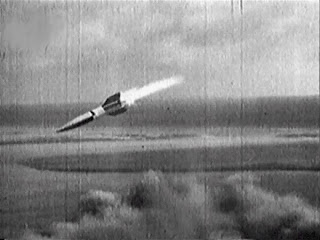 From mid 1944 to early 1945, the German Luftwaffe fired rockets at Britain, with the aim to harm and intimidate the population. Many thousands of people were killed and many more injured, while the loss of property reached colossal proportions. Still, the British people suffered through the attacks, knowing that the allied forces were hard at work to repel the Germans from France and the Benelux countries.

V-1 rocket campaign
The name of the rockets, V, came from the German word Vergeltungswaffen, which means weapons of reprisal. The first generation, the V-1, was developed by German scientists at the Peenemünde research facility on the Baltic Sea, under the direction of Wernher von Braun. The V-1 rocket was outfitted with an explosive warhead weighing one tonne. These bombs caused considerable damage. The attacks against London began on June 13, 1944, a week after the D-Day landings. At the beginning, up to 100 V-1s fell every hour on London. Over an 80 day period, more than 6,000 persons were killed and over 17,000 were injured. A million buildings were wrecked or damaged. The attacks occurred around the clock in all types of weather which caused terror among the population.

V-2 rocket campaign
In September of 1944, the Nazis introduced the more sophisticated and more deadly V-2 rocket, with an over one tonne explosive warhead. Over a thousand V-2 rockets were fired between September 8, 1944 and March 26, 1945. However, the rockets only reached London for ten days, or until September 18, when the allied forces pushed the German forces out of range of London. The bombings then continued on other parts of the country, mostly to the south and west of London.

Astrology of the events 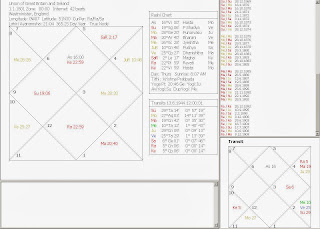 In the 16° Virgo rising horoscope for the UK, the Saturn - Jupiter period was operating from 16 June 1943 to 28 December 1945. The major period of 6L Saturn in infancy and badly placed in 12H is consistent with the UK being involved in conflict abroad while enduring significant losses. Indeed, the UK was attacked from the air in 1940-41 and again in 1944-45. The nation sacrificed its young men to the war and despite the best efforts of the military, the nation lost its status as the preeminent military power in the world during WW II. The USA quickly moved in and usurped that role. The UK also lost some major colonies in Asia, Africa and the Middle East, as these countries became independent. By comparison, when the more favourable major period of Mercury -- as 1L in the sun-like 3H -- began at the end of 1945, the UK soon felt the benefits of the Allied victory in Europe Nevertheless, it took the country roughly two decades to wind down its foreign currency imbalances as the widespread use of the Pound Sterling around the world was phased down. 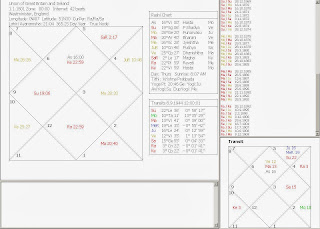 At the start of the V-1 rocket bombings on June 13, 1944, transit 6L Saturn at 6° Gemini was in aspect to natal 6L Saturn at 2° 17‘ Leo and 12H. The transit nodes had been stationary over natal 4L Jupiter in the first part of the year, imparting stress on the communal harmony. At the time of the commencement of the V-1 campaign, transit 4L Jupiter was at 29° Cancer where it was conjunct natal 6L Saturn at 2° Leo and about to enter the 12H of losses. Indeed, at this time, horrendous destruction of British homes took place and the population endured not only significant casulaties but also outright terror. The natal nodes were also afflicting transit 1L Mercury and 2L Venus, which was also combust transit 12L Sun at the time, reflecting the substantial loss of life. Finally, natal Rahu in 7H was afflicting transit 8L Mars in debilitation in 11H.

At the start of the V-2 rocket bombings on September 8, 1944, transit 6L Saturn at 15° Gemini and 10H MEP was aspecting transit 4L Jupiter at 16° Leo and 12H MEP, as well as the 12H, 4H and 7H. Saturn would remain stationary in the 10H MEP through January 1945. Hence, conflict was a prominent fact of national life that winter. Fitting the bombings, transit 8L Mars was at 13° Virgo and 1H MEP when the bombings started, from where it also aspected 4H owned by Jupiter, 7H and its own 8H. During the winter, the nodes became stationary at 25° Gemini, thus afflicting the weak natal 11L Moon in the 10H. Indeed, the bombings introduced an element of terror into the life of the English, as the V-2 rockets could not be intercepted and struck at random times and locations. When the bombings ended on March 26, 1945, the transit afflictions of 6L Saturn and the nodes had lifted.

Summary
The episode highlights the trend influences of a weak sub-period lord, 4th lord Jupiter, which rules over housing and communal harmony. Moreover, Jupiter transited the 12th house of losses while the bulk of the attacks took place, where it was afflicted by both natal Saturn as 6th lord of conflict and transit Saturn. Like the USA, the UK got involved in WW II during the major period of its 6th lord (Saturn).