The power to tax

The first major test of the new taxing powers of a federal government under the new US Constitution took place in 1791, with the imposition of a federal excise tax on distilled spirits, giving rise to the so-called Whiskey rebellion in 1794. This development is clearly seen in the natal, period and transit influences of the SAMVA USA chart, including the seeds of the uprising, its culmination and the reimposition of order in the affected states. Additionally, the repeal of this tax in 1800 and impetus for a two party system are seen in these developments - and the chart.

Historical background
The Whiskey Rebellion, also known as the Whiskey Insurrection, was a popular uprising that had its beginnings in 1791 and culminated in an insurrection in 1794 in the locality of Washington, Pennsylvania, in the Monongahela Valley. The rebellion occurred after the Articles of Confederation had been replaced by a stronger federal government under the United States Constitution in 1789.

A new U.S. federal government began operating in 1789, following the ratification of the United States Constitution. A source of government revenue was needed to pay the bond holders to whom the debt was owed. By December 1790, Hamilton believed that import duties, which were the government's primary source of revenue, had been raised as high as was feasible. He therefore promoted passage of an excise tax on domestically distilled spirits. This was to be the first tax levied by the national government on a domestic product. Although taxes were politically unpopular, Hamilton believed that the whiskey excise was a luxury tax that would be the least objectionable tax that the government could levy. In this he had the support of some social reformers, who hoped that a "sin tax" would raise public awareness about the harmful effects of alcohol. [1]

The whiskey excise became law in March 1791. Angered by the imposition of such a tax by the federal government, farmers in the western counties of Pennsylvania engaged in a series of attacks on excise agents. The tariff effectively eliminated any profit by the farmers from the sale or barter of an important cash crop, and became the lightning rod for a wide variety of grievances by the settlers of the region against the federal government. While citizens in the east did not find it difficult to abide by the concept that individual states were "subservient to the country," people west of the mountains were less accepting of decisions made by the central government. The rebel farmers continued their attacks, rioting in river towns and roughing up tax collectors until the so-called "insurrection" flared into the open in July of 1794 when a federal marshal was attacked in Allegheny County, Pennsylvania. Almost at the same time several hundred men attacked the residence of the regional inspector, burning his home, barn and several outbuildings. Pittsburgh was another scene of disorder by enraged mobs.

On August 7, 1794, President Washington issued a proclamation, calling out the militia and ordering the disaffected westerners to return to their homes. Washington's order mobilized an army of approximately 13,000 — as large as the one that had defeated the British — under the command of General Harry Lee, the then-Governor of Virginia and father of Robert E. Lee. Washington himself, in a show of presidential authority, set out at the head of the troops to suppress the uprising.

The Proclamation was the first use of the Militia Law of 1792 setting a precedent for the use of the militia to "execute the laws of the union, (and) suppress insurrections," asserting the right of the national government to enforce order in one state with troops raised in other states. Even more importantly, it was the first test of power of the new federal government.[1]

The Whiskey Rebellion of August 1794 was the product of growing discontentment, which had been expressed as early as 1791, of grain farmers who resented a federal tax imposed on their distillery products. As growers threatened federal tax collectors with physical harm, Washington at first tried to prosecute the resistors in the court system. In 1794, however, 6,000 men angry at the tax gathered at a field near Pittsburgh and, with fake guillotines at the ready, challenged Washington and the federal government to disperse them.

After issuing the public proclamation, President Washington gave his former Revolutionary War aide-de-camp and current Secretary of the Treasury Alexander Hamilton the power to organize troops to put down the rebellion. In his letter to Lee on August 26, Washington noted that the general populace considered the insurrection with "universal indignation and abhorrence" and said that he otherwise would not have authorized such a heavy-handed response. Washington knew that the nation, having only recently violently overthrown the tyrannical English king, was in a delicate state and did not want to appear as an equally despotic president. He waited to see if the insurgents would back down; they did not. 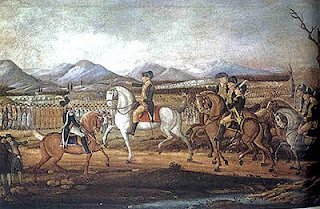 According to biographer Joseph Ellis in His Excellency, George Washington, the aging president mounted his horse on September 30 to lead a force of 13,000--larger than any American army amassed in one place during the Revolution--to quell the uprising. (The act of mounting his war horse was brief and largely symbolic; Washington made most of the journey by carriage.) Lee joined Washington and the army on its march to Pennsylvania. This was the first and only time a sitting American president ever led troops into battle. Washington abandoned the procession early, however, leaving Alexander Hamilton, the true mastermind of the military response to the insurrection, in charge of the final approach to Pittsburgh.

The rioters dispersed in the presence of the federal troops and bloodshed was averted. In the aftermath, Washington reported to Congress that although he had agonized about the decision and intended to uphold the constitutional right to protest unfair tax laws, the insurrection had to be put down or the survival of the young democracy would have been in peril. Congress applauded his decision, but Washington's former Secretary of State Thomas Jefferson, who was in temporary retirement at his Monticello estate, viewed Washington's decision to call out troops against fellow citizens as a dire threat to republican ideals and an abuse of presidential power. The uprising highlighted a growing division in early American politics which, by the end of Washington's second term, pitted rural, agricultural interests, led by future Presidents Jefferson and James Madison, against the pro-industrial urban interests, represented by Hamilton and John Adams, and gave rise to the two-party political system.[2]

The Whiskey Rebellion demonstrated that the new national government had the willingness and ability to suppress violent resistance to its laws. The whiskey excise remained difficult to collect, however. The whiskey tax was repealed after Thomas Jefferson's Republican Party, which opposed Hamilton's Federalist Party, came to power in 1800.[1]

In the SAMVA USA chart, it is the sign Aries that falls into the 10th house and its MT lord Mars thus becomes the 10th lord in the SAMVA USA chart. Mars is in its own sign Scorpio and the 5th house and is in mutual aspect with an exalted 1st lord Moon in Taurus and the 11th house. By itself, this means that Americans identify strongly with their own government and the government affairs would generally be expected to prosper. However, as Rahu is natally conjunct the Most Effective Point of the 10th house, material desires bring manipulations and deceptions into this field. We could also note that Rahu is the general indicator of intoxicants. Rahu also aspects and thus harms the 2nd house of wealth, the 4th house of communal harmony and 6th house of conflict. So, the manipulative tendencies are felt strongly in the national life. At the same time, Jupiter as 6th lord is in Scorpio and in aspect to the Moon. This aspect, while not harmful by itself, introduces tension into the identity of the country about financial matters and conflict. More so as Venus as 4th lord is placed in the 6th house and Ketu natally afflicts the 4th, introducing sudden and explosive upsets to the collective harmony. Ketu also aspects the 8th house of obstacles and endings, 10th house of government and foreign trade and 12th house of foreign matters, smuggling, losses, etc.. All told, the issues of government and taxation are a persistent source of debate, even occasional upset in the national life. The key protagonists tend to be isolated groups or individulas ruled by Ketu or vested interests or unethical business concerns ruled by Rahu.
.
Interestingly, it can be said that the placement of Rahu and Ketu captures the early division of interests by the industrial states using hired labor of the North vs. the farming and slave holding states of the South, which erupted in the civil war of the 1860s. Moreover, these placements are likely also influential in the modern division of business vs labor seen in the Republican and Democrat parties since the opening of the 20th century.

As for the insurrection, it is noteworthy that the Mars - Jupiter period was operating when it finally flared up in the Summer of 1794 and when it was summarily surpressed that same Autumn. Mars rules the 10th house of government and Jupiter is 6th lord of opposition and conflict. Both reside in the 5th house of creativity, speculation and are influenced by and influencing the Moon as 1st lord of self in the 11th house of income and aspirations. Natally, Jupiter and the 2nd lord Sun in the 7th house rule the taxing powers of the government.

Winter of 1790/91
The exise tax was proposed in December 1790 and became law in March 1791. The Moon-Venus period was operating from February 17, 1790 to October 19, 1791 when the Moon-Sun period began. The Venus sub-period is appropriate for the imposition of the first federal tax on a domestic product, which also caused consternation by the farmers producing the distilled liquor, which simmered until it burst out as open revolt a few years later.

Early 1974
In early 1794, transit Saturn was conjunct natal Rahu in the 10th house, and in opposition to natal Ketu. This is likely to have created a disturbance to the communal harmomy in the country that erupted in the summer when the stationary transit affkictions involving the first rate malefics took place in the chart. 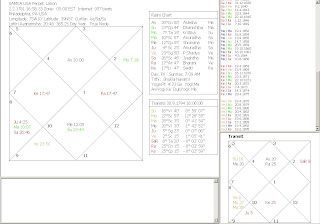 During the crisis, transit stationary Ketu had become widely conjunct the strong Sun in the chart, adding to the political pressure on the President. On September 30, the US President showed his presidential authority when transit 2nd lord Sun and transit 3rd lord Mercury were conjunct the MEP of the 3rd house of initiative. On October 23, transit Ketu in normal retrograde motion became exactly conjunct the natal Sun and by end October had passed out of the 1° orb. Because of this, we can assume that most of the tension on the authority of the State and the President had died as the month of November began.
.
Influence of Rahu major period
It is interesting to note that the whiskey tax was repealed immediately after the Rahu major period began on April 19, 1799.

Conclusion
The Whiskey Rebellion can be traced back to new taxation on distilled liquor in the Winter of 1790/91 when the Venus sub-period was operarting. The open revolt broke out during the Mars major period and Jupiter sub-period. While the taxing powers of the US government were put to the test, the government easily withstood the challenge. There were only a few casualties. Moreover, tax evasion became a problem in the wake of the rebellion. As soon as the Rahu major period dawned, the tax on the domestic production of Whiskey was repealed, signalling a temporary victory by the vested interests. Interestingly, as has been shown in the article Boom bust and war, distilled liquor again became a national issue during the second major period of Rahu from 1919 to 1937.

References
[1] Wikipedia: The Whiskey Rebellion
[2] August 26, 1794: George Washington writes to Henry Lee
http://www.history.com/this-day-in-history/george-washington-writes-to-henry-lee
Posted by Cosmologer at 4:01 AM No comments: