CRISIS IN THE FALL 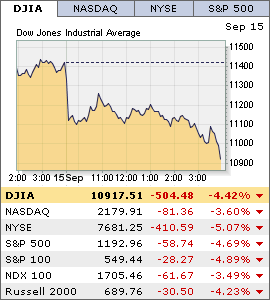 In late 2007 it was predicted on the SAMVA blog that a crisis would unfold in the USA in the fall of 2008. A financial crisis has now arrived in the form of investment bank Lehman Brothers filing yesterday for bankruptcy protection from its creditors. This development has sparked market turmoil not only in the USA but around the globe. News of the decision sent stocks in Europe down by over 5% and the Dow Jones Industrial Average closed nearly 500 points lower -- its worst drop in more than seven years.

In a blog The year ahead for the USA on December 31, 2007 the following prediction was made:

Crisis in the fall
"The astrological situation will become decidedly more intense from late July. At that time, the Moon´s nodes. Rahu and Ketu, will go into stationary motion over the natal Sun in the chart at 23° 44' Capricorn in the 7th house. At that time, PROBLEMS OR STRESS will be felt from foreign affairs, the WEALTH OF THE COUNTRY (possibly having to do with a reduction in the value of the dollar or stocks)...This aspect peaks at the end of September and the situations that arise are expected to gradually ease in the following weeks. " 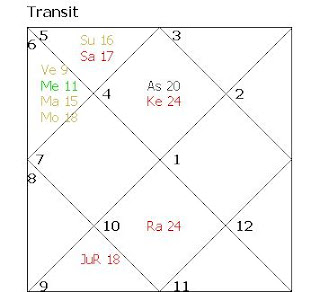 The difficulty is primarily seen in the transit stationary conjunction of RAHU to natal 2nd lord SUN in the SAMVA USA chart (Perpetual Union).

Moreover, "the aspect of transit Jupiter to transit Saturn ...is within 1° orb from 2-19 September 2008 around 19° Sagittarius and Leo. Both transit Jupiter and transit Saturn will then be under the aspect of natal Rahu at 18° Aries and 10th house, adding to the potential for violence. The aspect may find expression in relation to the WEALTH, STATUS and relations with neighboring countries as transit Saturn is within the most effective point of the 2nd house when it becomes dual afflicted. ...The difficulty could be severe at that time (message on Political Astrology list on Yahoo on August 30, 2008 7:20 PM).

Manipulation highlighted
The nature of the problems was also highlighted in the prediction:

Politicians, clergy or BANKERS WHO HAVE RESORTED TO MANIPULATION MAY BE EXPOSED AT THAT TIME."
It is a fact that the management of Lehman Brothers denied the extent of their problems, perhaps in an effort to reassure the market in the summer of 2008. However, when their profit statements were published, the accounts revealed a grimmer picture and the share price collapsed. In September, the full scope of their problems was evidently revealed to a number of prospective buyers who backed away from buying the company or its distressed assets. The financial condition of the bank was being manipulated in terms of the information being presented to the broader market[1]. In any event, the situation had become so bad that without the needed capital infusion, the company collapsed. More fundamentally, the prediction suggested unsound lending practices would lead to a crisis.

Another stunning prediction
Vedic astrologer V.K. Choudhry made the following prediction on SAMVA list on August 29, 2008 11:47 AM:

This prediction has not only been realised but Lehman Brothers declared bankruptcy on the the 15th of September - the date mentioned in the prediction!

Looking ahead
Importantly, it has also been predicted based on the SAMVA USA chart that while the financial crisis may result in difficulties for individual banks, the US financial system should remain intact. Moroever, the turmoil should become easier from the first week of December 2008 and then diminish progressively from mid February 2009.

ADDENDUM
A weather prediction was also made with regard to the influence of faster moving planets: