Artist for the ages

Paul McCartney, a legendary creative force in the biggest band of all time, the Beatles, was born on June 18, 1942 in Liverpool, England, UK. There is some uncertainty about the birth time, but most accounts suggest a time of around either 2 am or 2 pm. A rectified horoscope for him is based on 1:35 p.m. giving 27° 56' Leo rising. Alternative ascendants, to cover these times, giving a Virgo, Capricorn, Aquarius or Pisces ascendant, do not offer a credible fit.

The Leo ascendant gives a good fit for Mr. McCartney as "a fiery sign ruled by the Sun, the significator of vitality, intelligence, male progeny, social status, profession, father, heart, royalty and magnificence"[1].

In this article, his horoscope is explained in terms of the System's Approach, a horoscopic astrology method based on the sidereal zodiac, with a focus on the placements. His life has been devoted to creative contributions, early on involving collaboration with other outstanding artists, notably John Lennon, with great public acclaim. 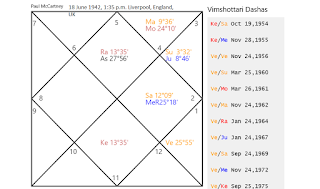 Leo becomes the first house and the succeeding signs thus constitute the houses counted from there, i.e. Virgo becomes the 2nd house, Libra the 3rd house, etc. The functional benefic planets in the Leo rising horoscope are those planets ruling the moolatrikona signs falling in the good houses, i.e. 1, 2, 3, 4, 5, 7, 9, 10 and 11. These are the magnanimous Sun as 1st lord of self, the analytical Mercrury as 2nd lord of wealth, status and family, the artistic Venus as 3rd lord of communication, the expansive Jupiter as 5th lord of creativity, intelligence and children, structuring Saturn as 7th lord of spouse and advisors and energetic Mars as 9th lord of luck and father. This leaves the three functional malefic houses, i.e. the 6th house of conflict, health and finances, 8th house of obstacles and endings and the 12th house of losses and bed pleasures. The nurturing Moon as 12th lord of losses and far away places is a functional malefic planet for Leo's, along with the karmic Moon's nodes of Rahu, ruling materiality, and Ketu, ruling separation.

The personality of Leo's is described principally by their ruling planet, the Sun. A strong Sun gives them plenty of heart, character, will power and willingness to lead. The conditions of other planets help to explain other dimensions of their personality. In this chart the 1st lord Sun in early Gemini and 11th house, gives an interest in friends, future plans and income. It also makes the personality idealistic.

The McCartney family
Paul's mother, Mary Patricia McCartney (ne Mohan) was a midwife and as such the family's primary source of income. His father, James McCartney, was a musician and worked in the cotton trade. Paul was baptised Catholic but his father, who was born protestant, was an agnostic and religion was not emphasised in the household. Paul's younger brother was Michael, who also took up music based on their father's encouragement.

Paul's father is represented by the Sun and 9th lord Mars. The Sun is well placed in Gemini and the 11th house ruling future plans, friends and income. It is slightly weakened by being in infancy. Mars is badly placed and debilitated in the 12th house. These placements represent his inspirational influence but also his modest career. 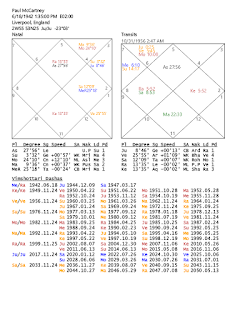 Mary passed away from complications of breast cancer when Paul was only 14 years old. At the time, the Ketu-Mercury period was operating. Ketu is the planet of separation but Mercury represents the family. On the day of her passing, transit 2nd lord Mercury was in Libra and 3rd house, while its dispositor, transit 3rd lord Venus, was conjunct 12th lord Moon in the 2nd house and under exact aspect of transit stationary Ketu in the 10th house.

Beginning of artistic efforts
In November, 1956, Paul entered the major planetary period of Venus. Venus is the planet of art and represents the wife in a man's chart. Venus is is 3rd lord of communication in Aries and in the most effective point of the 9th house. It thus also aspects its own house, giving luck to his efforts as a writer of songs and lyrics. It detracts from the overall strength that its dispositor, Mars is weak in the 12th house of losses. His first songwriting effort at that time was "I lost my little girl." Importantly, as rulers of the 3rd and 9th house, Venus and Mars are, like 2nd lord Mercury, sun-like planets for Leo's, giving additional strength to their indications. This is an important consideration to explain the quantum of his success. 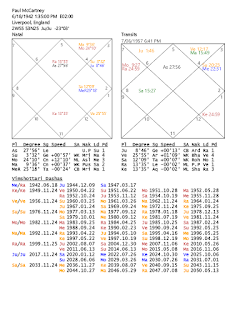 Friends are indicated by the 11th house, and Paul has both his 1st lord Sun and 5th lord Jupiter there. It indicates interest in friendships with creative people. Paul met John Lennon on July 6, 1957. He was running the Venus-Venus period and natal Venus is placed in the 9th house of luck. On that day, transit Venus was in the 12th house where it was conjunct both his natal and transit Mars, the 9th lord of luck. Meanwhile, transit 12th lord Moon was in Libra and the 3rd house, owned by Venus. There were other important placements, including the conjunction of 1st lord Sun and 2nd lord Mercury, involving self and status in the 11th house of friends. Meanwhile, tr 5th lord Jupiter, was in Virgo and 2nd house. It was an auspicious meeting of two young men who were to become the famous Lennon-McCartney songwriting duo.

Hamburg years
Lennon and McCartney soon attracted George Harrison and others to their early efforts at forming a band. They made several trips to perform in Hamburg, Germany between August 1960 and December 1962. While there, they cut their teeth as performers.

This is seen in the link between 3rd lord Venus in the 9th house and the placement of 9th lord Mars in the 12th house, representing foreign countries. The Venus - Sun period ran from March 1960 to March 1961, when the Venus - Moon period began, which ran until November 1962, when the Venus-Mars period began. By August 1962, the line up of The Beatles was finalised with another musical genius, Ringo Starr, whom they had met and befriended in Hamburg. 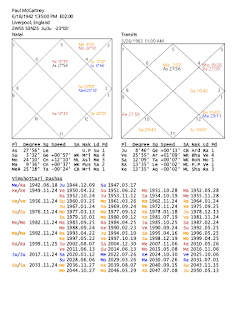 The Beatles were prolific songwriters and honed their craft by performing songs by other songwriters as well as their own material. After meeting up with first their manager, Brian Epstein, and then producer, George Martin, they soon hit up on a winning formula and their first single to reach the no. 1 spot on the UK charts was "Please, please me" in May of 1963.

The Venus-Mars period was running in Paul's horoscope. Transit 9th lord Mars was in the 1st house, while 1st lord Sun was in the 10th house, conjunct his 7th lord Saturn, which indicates spouse and partners. Transit 3rd lord Venus and transit 2nd lord Mercury where in the 9th house of fortune.

Break up of the Beatles 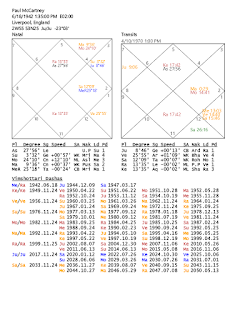 After Brian Epstein died in August 1967, the band members eventually ran into problems managing the band and their creative company, Apple. It also emerged that the band members had been ripped off by the record company. Conflicts emerged about who should manage their finances and cracks appeared in their artistic collaboration. George Harrison wanted to have more of his songs included on the albums, and even the calm one, Ringo Starr, got frustrated and took a break. John, who had met Yoko, became more passive and Paul stepped in as the effective band leader. What is likely more of a factor, is that they had been working together for over ten years, and as George Harrison later said, "we sacrificed our nervous systems" in the process. They had been under great strain, not just from the fame and demands for ever greater creations, but they were also weighed down by drug use. They desperately needed a change of direction, or a fresh start. In September 1969, John Lennon informed his band mates that he was planning to leave the band. This came as a blow to the others, but the decision remained private until Paul announced that he was leaving the band on April 10, 1970. This is considered the end of the Beatles.

In Paul's chart, the Venus-Saturn period was running from September 1969. As 7th lord of the chart, Saturn represents partnerships. At the time of the break up, transit Moon, as 12th lord of losses, was conjunct natal Saturn in the 10th house and transit Saturn in the 9th house was under close aspect from transit Ketu, the planet of separation in the 1st house of self. Finally, transit Sun, as 1st lord of self, was in the 8th house of endings. 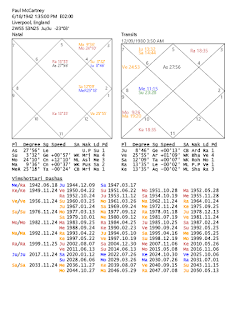 Tragedy struck on December 8, 1980, when a deranged gun man shot and killed John Lennon, Paul's friend and most significant collaborator. They had recently, begun to heal their strained relationship. As Paul later remarked, they had said their good byes on better terms.

Lifelong career
Paul McCartney is that rare artist that has remained relevant throughout his life. With Saturn as 7th lord in the 10th house, travelling is seen as part of the career. Indeed, Paul was always the Beatle most inclined to tour. He has done so throughout his career, to the delight of his millions of fans. Today, at the age of 76, he is still delighting his fans, as his recent appearance on James Corden's Carpool Karaoke show demonstrates.

In November 2017, he entered the major planetary period of Jupiter. Jupiter is the 5th lord in Gemini and 11th house. It is just outside the orb of conjunction with the powerful Sun, but combust, indicating creativity in the sphere of future plans, friends and income. Jupiter, along with the Sun, is a planet indicating religion. The period suggests he may have a religious awakening at this stage in his life, focused on his plans for the remainder of his life. It could also be a joyful and creative time.

Posted by Cosmologer at 4:25 PM No comments: