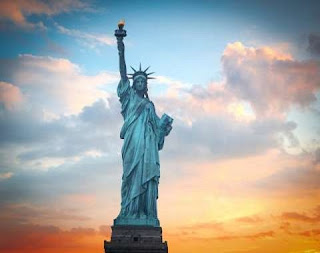 Since early 2008, many accurate predictions have been made on the basis of the 20° Cancer rising SAMVA USA horoscope. Notable among these is the prediction for a resurgence in the USA from April 2016. What is remarkable is that the predictions mentioned exactly the kind of language that President Donald Trump has adopted in his public statements. While the predictions focused on the trend in national affairs, they did not discuss the sub-period or transit influences throughout the six year period. When these are considered, the turmoil in national affairs from 2017 becomes more understandable. However, even if these are considered, in terms of their impact on national affairs, the Trump administration has pushed ahead with policies aimed at invigorating the US economy and removing obstacles to a durable world peace.

On December 18, 2017, President Trump announced his National Security Strategy, with the following words:

" First and foremost, President Donald J. Trump’s National Security Strategy is a reflection of his belief that putting America first is the duty of our government and the foundation for effective U.S. leadership in the world. It builds on the 11 months of Presidential action thus far to renew confidence in America both at home and abroad. Four vital, national interests—organized as the strategy’s four pillars—form the backbone of this commitment:


Nature and timing of predictions
Since early 2008, a resurgence has been predicted in US the national life based on these very same characteristics: prosperity, strength, influence, security, etc. during the Sun major period of the SAMVA USA chart.

"In the third SUN dasa in the 3rd dasa cycle, which runs from April 9 2016 to April 10 2022, we can expect the extension of the territory, the increased authority of the USA abroad, in short, the return of the might of the country."


In a prediction on November 2009, the prosperity was noted:


"The combined influences of the planet manifest in the national life, both as a permanent natal influence and as a highlighted temporary influence due to transits of the planets and the operation of periods.

In an article from March 2010, the protective nature of America's foreign policy built on "peace through strength" in the first Sun major period in the USA (1776-1782) was discussed:

The founders of the USA planted the seeds of national greatness that has been the hallmark of the USA ever since.
"In his last years in office, an embattled President George Washington yearned for a time when this nation will possess the strength of a Giant and there will be none who can make us afraid."

Elements of the Sun major period
In sum, the attributes of the placement of the Sun in the SAMVA USA chart, gives wealth creating attributes in terms of its role as 2nd lord of wealth and status. The power of the US Presidency is explained by the general indication of the Sun as leader. The international dimension of American influence is due to the Sun's placement in the most effective point of the 7th house of foreign relations and policy. Moreover, the Sun's aspect to the first house of the chart, gives the USA an image of a powerful entity. Based on this, it was predicted since 2008 that the above elements would come to the fore during the Sun major period from April 2016 to April 2022. This accurate prediction offers a stunning confirmation of the authenticity of the SAMVA USA chart as well as the accuracy of the Systems' Approach as a method of interpretation and prediction.

Other influences in the Sun major period
There are other influences on Sun in this chart, that also have a bearing on the outcome. The legendary deceiver and manipulator, Rahu, is in the 10th house MEP, from where it aspects the 2nd house, owned by the Sun. This explains why US businesses try to manipulate the Office of President, the government and legislature, for their own interests. However, in the Sun period, this tendency is suppressed with an emphasis on the national interest, considering especially the welfare of millions of working Americans, whose wages dropped as big corporations profited from outsourcing millions of manufacturing jobs abroad, while competition from millions of illegal and low skilled immigrants pushed their wages further down. In 2017, the United Nations estimated 40 million Americans were living in poverty. This is what the Trump administration has announced it is trying to change for the better. Finally, as Saturn as lord of the 8th house aspects the Sun, this adds easy gains to the status and wealth of the USA, but also danger to the Presidents. This is more so as Ketu aspects the 8th house, adding the potential for sudden explosive events to the indications of Saturn.

The difficult transits and sub-periods in 2017-2020, including sub-periods of Rahu, Jupiter and Saturn, and transits of 6th lord Jupiter in Libra and 4th house, 8th lord Saturn in Sagittarius and 6th house and nodes in Gemini and 12th house and 6th house, have made it hard to establish harmony and consensus about this project of national resurgence. It was also predicted on the SAMVA discussion list in early 2017 that this was likely to result in the energe of obstacles and endings in the area of political conflict. Many people are still caught up in a mind-set of discrimination and inferiority after decades of policies that undermined social harmony and economic growth by fostering ever more inequality. The year 2019 will likely be the peak year for such disharmony, when transit 8th lord Saturn and transit Ketu become conjunct natal 4th lord Venus at 23° 50' Sagittarius and 6th house MEP. At that time, it is likely that the nation will confront its inner discord and eliminate it, but likely not without great upset or suffering.

Establishment of the trend
By April 2022, when the Sun major period ends, this trend of resurgence will likely have become firmly established in the national life. The positive influences of the Moon period (2022-2032) will then begin to set in.
Posted by Cosmologer at 10:16 AM No comments: