Freedom of the US Press 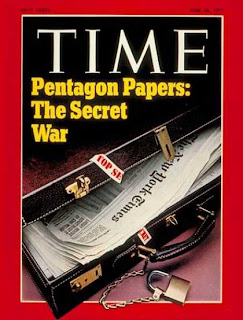 Several articles have been written on this blog to document the momentous shift in US national affairs that took place as the Mercury major period and Mercury sub-period began in the SAMVA USA chart on April 19, 1972. At the same time, the Saturn major period and Jupiter sub-period ended. The article 1972 documented the computer and internet technology revolution and other socio-economic shifts of the time. The article Mercury as Messenger drew out the historical parallels between the first and second Mercury major periods in the SAMVA USA horoscope. Any astrological study of a country ultimately depends on how well we know the significant events and their true meaning for the national psyche and development. Further study of this period change has revealed another momentous such shift, which perfectly matches the planetary periods of the time. The episode of interest concerning the change from the Saturn period to the Mercury period is the release of the Pentagon Papers by the New York Times on June 13, 1971. This singular act, more than any other, is seen to have dramatically increased the freedom of the press in the USA and its independence from the government. This article documents that development and explains it astrologically. 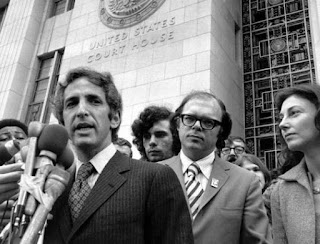 The Pentagon Papers was a Top Secret study by the Rand Corporation, instigated by the Department of Defense during the Johnson Presidency, to document the historical origins of the Vietnam War. The study revealed a systematic behavior of deception ("lying") by all US Presidents when describing US involvement in Vietnam, stretching back from Truman to Eisenhover, Kennedy and Johnson. Nixon was elected on the promise to end the war honorably. However, the pattern of deception continued. The person that decided to release the Pentagon Papers was Daniel Ellsberg, who had been highly involved in planning the Vietnam war at the highest level, as a close advisor to Robert McNamara but had become an anti-war activist. His motivation for the release of these Top Secret documents, first to the US Congress (which did not do anything with it) and then to the media was to alert the US public to the deceptions by the Executive branch of government. Ellsberg was convinced in doing so, at great risk to his own life, would change the tide of opinion on a war, which he considered morally abhorrent, and end it. While the release has the intended effect, it had another impact which Ellsberg did not foresee. As it turns out the real legacy of the release is now considered to be increased freedom of the US press. Indeed, the release pitted the US government against the US media with fascinating implications for the coming years. After the NY Times began to report on the 7000 page study in daily installments on June 13, the US government got an injunction against the paper on June 19, 1971 to stop it from publishing more Top Secrets about the war. Nixon claimed the release was assisting the enemies of the country, while it has later been suggested that the "imperial" Presidency of Nixon, with a clandestine and unaccountable government, was turning into a real threat to the freedoms of the American people. In order to circumvent the injunction against the Times, Ellsberg, now in hiding, provided the documents to other newspapers, with 17 newspapers reporting on parts of the information. One Senator read the document into the Congressional Record, ensuring their availability to the US public and thus effectively preventing the government from suppressing the information. On June 30, 1971, based on the 1st amendment to the US Constitution, the Supreme Court ruled that the New York Times and Washington Post could continue to report on the secret papers.


Casting off the shackles of oppression

While the papers created a shock and indeed helped to end the war, the main legacy of this event is to have altered the relationship between the US media and government ever since. No longer would the media be subservient to the government as it had been during the Saturn period (1953-1972). At that time, a fear of nuclear destruction and the spread of communism ruled the mindset of the media and Congress. This is consistent with Saturn being the 8th lord in the SAMVA USA chart, ruling over obstacles and endings - the fear of death - and the belief of people in their government. In the Mercury period, all of this changed. Mercury is the 3rd lord of speech and action. It is the quintessential planet of communication. It is placed in the 7th house of others and foreign policy. Historically, this period has been associated with casting of shackles placed on freedoms. As this period dawned the freedom of the US Press was awakaned. The Pentagon Papers espisode has been called the "Declaration of Independence" for the free press in the USA.

The episode also laid the seeds for the Watergate Scandal, as Nixon's reaction to the security breach was to become even more secretive and create the "Plumbers" outfit to spy, first on Ellsberg's psychoanalyst (to discredit Ellsberg), but ultimately the spying extended to the opposition party, the Democrats prior to the 1972 election (which Nixon won, despite the revelations of the Pentagon Papers). The newly freed press, with tacit support from an awakened Congress, went after Nixon and exposed his illegal actions, costing him the Presidency in 1974. This has been described in the article Downfall of a President. 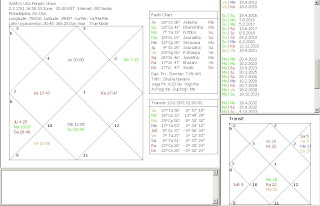 Ellsberg began to plan the release of this study in early 1971, during the final year of the Saturn-Jupiter period. His efforts coincided with stationary transit of Rahu ruling manipulation conjunct the 2nd lord of status, the natal Sun ruling the leader of the country (the President) in the SAMVA USA horoscope. Indeed, the manipulations created great difficulty for the US President. Another important aspect was the stationary opposition of transit 6th lord Jupiter at 5° Scorpio and transit 8th lord Saturn at 5° Taurus, involving natal 6th lord Jupiter of conflict and natal 1st lord Moon of the identity of the USA. This aspect was consistent with the horrific phase of the Vietnam war when thousands of Vietnamese civilians and combatants alike were being systematically killed with huge bomb drops. The war had begun to tear at the psyche of the nation, not least due to such things as the My Lai Massacre, but LT. Calley was convicted for his part in it on March 29, 1971. Such events had a huge influence on the mores of the time.


There is a documented tendency of the US government to deceive the American people. In this regard, we may recall the natal conjunction of Rahu to the MEP of the 10th house of government and its aspects to the 2nd house of status, 4th house of communal harmony and the 6th house of conflict and court cases. That said, the manipulation is also considered a necessary attribute of modern statecraft to keep sensitive plans secret. The good and strongly placed Sun and Mars as 10th lord of government, are highly positive influences in the chart. So, the horoscope does not reflect an oppressive government at all, only that it has a tendency for manipulation.

In addition to the many accurate predictions based on this horoscope, such studies of the changes in national affairs coinciding with a change of planetary periods, in this case from the Saturn period to the Mercury period, reveal the simple fact that if there was ever a system of astrology and a horoscope to accurately reflect the history of a country, in this case the USA, it is the Systems Approach (SA) and the SAMVA USA chart.

Wikipedia on the Pentagon Papers
http://en.wikipedia.org/wiki/Pentagon_Papers
Posted by Cosmologer at 6:31 AM No comments: