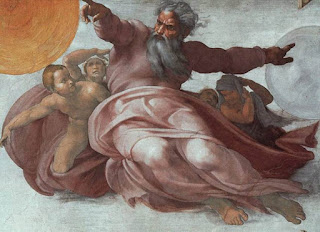 In the summer of 2019, an unusually difficult transit configuration will connect with a sensitive natal placement in the 20° Cancer rising SAMVA (Perpetual Union) horoscope for the USA. The Sun-Saturn period will be operating and transit sub-period lord, 8th lord Saturn, will become conjunct transit malefic Ketu, which will be stationary at 23° 30‘ Sagittarius and the 6th house of the horoscope, right on top of natal 4th lord Venus at 23° 50‘ Sagittarius. While the US is predicted to enjoy political stability and respect in global affairs during the Sun major period from April 2016 to April 2021, the summer of 2019, especially the months of May to July, suggest that an unfortunate series of events is likely that will be accompanied by a loss of harmony in the national life.

Astrology of the event 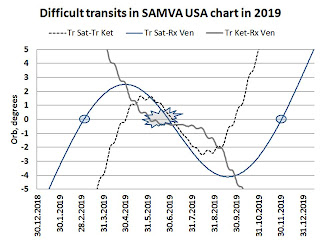 As the Saturn sub-period will be operating, the focus of national affairs will be on civil servants, low technology industries and mines as well as the indications of the eighth house, which include obstructions, fatal accidents, epidemics, capital gains, floods, earthquakes and storms. When Saturn joins Ketu, its indications of estrangement, separation, natural calamities and violent actions or events will also be activated. 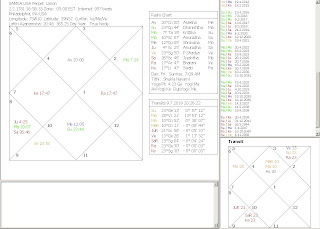 Moreover, the main focus of this destructive energy will likely be directed at the indications of Venus, which include resources and the aviation, entertainment and leisure industries. As Venus rules the fourth house, its indications will likely be disturbed, such as the nation's natural resources, agriculture, mines, general and political stability, natural calamities, educational institutions, law and order, housing and communal harmony.

As this transit–to-natal combination takes place in the sixth house, the problems will likely involve relations with neighbors, general health of the public, political stability, the financial solvency of the country, judicial functioning, labour relations and communal harmony in the country.

Over the summer, transit 6th lord Jupiter will also be moving in retrograde motion over sub-period lord Saturn at 26° 46' Scorpio and 5th house. This aspect is seen to increase the scope for a violent event. Transit Jupiter will then becomes stationary at 20° Scorpio, where it becomes conjunct the most effective point (MEP) of the 5th house of creativity, universities and young people. From there, Jupiter also aspects the 9th house of luck, 11th house of income, friends and goals and 1st house of self. The conjunction of Jupiter introduces an energy of conflict to these house indications.

Finally, around July 9, 2019, transit 2nd lord Sun will become conjunct transit stationary Rahu in the 12th house. This additionally suggests a tense few days for the President of the country.

Interestingly, the transits are seen to be difficult in the 24° 34' Cancer rising horoscope of Iran, which will be running Jupiter-Ketu period at that time. The conjunction of transit 8th lord Saturn and transit stationary malefic Ketu will be occuring in the MEP of the 6th house while transit stationary Rahu will be in the 12th house. Moreover, the transit nodes will be in close aspect to the natal nodes in the 2nd and 8th houses. The transits also suggest problems in the 23° 29' Cancer rising horoscope for the European Union with Rahu-Jupiter period operating. However, no natal planets are involved, so the problems would be less there. 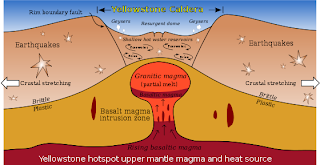 The indications mentioned above suggest that there could be a violent man made or natural event involving mass casualties. Alternatively, there could be a sudden large scale financial disaster, a deadly epidemic or a major pollution accident. The USA could also find itself involved in a war or endure an attack on its own soil. Whatever, the event, the transits are malefic and long lasting enough to suggest a significant strain on the national life during the summer of 2019.
Posted by Cosmologer at 2:22 PM

We could also keep in mind that on March 30, 2012, astrologer & author, V. K. Choudhry issued the following warning on SAMVA list:

"Though it is far away, yet it is always better to know the difficult prolonged transit afflictions in advance.

It is likely to be a time of incidence of far reaching economic reversal.

Many parts of the world will be vulnerable to natural calamities in the form of earthquakes of high intensity, storms, nuclear catastrophe, international military operations, tsumani type problems, threat of a pandemic situation, political problems, disasters, etc. etc. It may be a type of war-like situation for some countries. Large number of fatalities are likely.

Those countries will be more vulnerable whose ascending degree is between 23 to 19.

Those suffering from chronic health problems may find further intensity of the health problem. More people may be diagnosed for critical illnesses / cancer.

All of the astrological fraternity may better look into the birth charts of people in their touch for suggesting appropriate preventive astral remedies. Various country charts can also be studied for planning the course of life. Needless to say that preventive propitiatory remedies are likely to make a lot of difference in reducing the impact of the prolonged transit affliction of Saturn."

I have an idea. In 2019, Jupiter will be in the constellation of the Scorpion without dispositeur, the price of gold is on the rise (the price of gold does not depend on the United States). In addition, the second house (the strength of the currency) will be afflicted by the nodes.
However, the economist Norman Palma shows that when the price of gold rises, the dollar falls. Therefore, if the dollar drops, the demand for good American treasury will decline, which threaten the American economy, because in the book : an exorbitant privilege, the author demonstrates that the dollar pays 10 % of u. s. GDP.
If the dollar collapses, other countries will fall like dominoes, especially China, which has many reserves of dollars.
The financial disaster can come out of this side ?

In addition, you write that the United States could come into conflict. However, when a country wants to disengage from the dollar, they are threatened by American power. We can take the example of Libya : a lot of people think that the NATO intervention in Libya, in order to protect the privilege of the dollar, instead of acting for humanitarian purposes.

What do you think ?

sorry if there are mistakes my English is bad.