Tragedies in the US space program 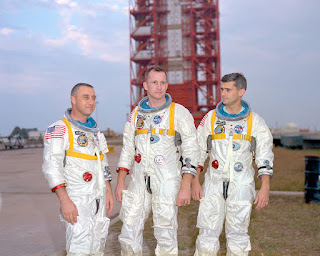 An earlier study explained the astrological factors behind US space achievements. The study concluded that "in addition to MARS being highlighted, indicating courage and technical achievement, and SATURN, signifying death defying acts, the role of MERCURY as 3rd lord of transportation and communication comes out loud and clear." In this article we examine the factors behind major tragedies in manned US space flights.

The risks of manned space flight are always there. However, during difficult transit aspects as seen in the SAMVA USA chart (Perpetual Union), the danger may be greater. At the present time, the aspects point to increased risks, although this should not be taken as a prediction of imminent catastrophy. However, as the space shuttle Endeavor is reported to be landing tomorrow, it is of interest to examine the astrological factors in the SAMVA USA chart at the time of three major tragedies in the US manned space flight program and compare them to the astrological dynamics at the present time.

As earlier discussed, the achievements of the US space flight program resonate strongly with the character of the American people as seen through the SAMVA USA chart. Not surprisingly, it is found that the same planets highlighted during the significant achievements also show up prominently during the tragedies, along with all the major malefics. 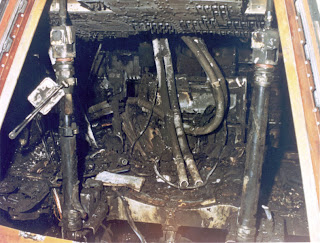 The Apollo 1 command module (CM-012) was destroyed by fire during a test and training exercise on January 27, 1967 at Pad 34 (Launch Complex 34, Cape Canaveral, then known as Cape Kennedy) atop a Saturn IB rocket. The crew aboard were the astronauts selected for the first manned Apollo program mission: Command Pilot Virgil I. "Gus" Grissom, Senior Pilot Ed White and Pilot Roger B. Chaffee. All three died in the fire.

"After nearly ten seconds of frenetic movement noises Chaffee yelled, "We've got a bad fire! Let's get out! We're burning up! We're on fire! Get us out of here!" Some witnesses said they saw Ed White on the television monitors, reaching for the hatch release handle as flames in the cabin spread from left to right and licked the window. Only 17 seconds after the first indication by crew of any fire, the transmission ended abruptly at 6:31:21 with a scream of pain as the cabin ruptured after rapidly expanding gases from the fire overpressurized the CM to 29 psi."
Astrological dynamics 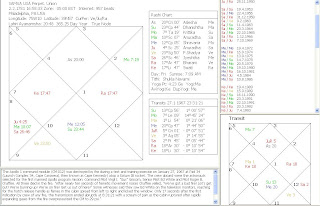 The dual malefic Saturn-Rahu period was operating.
- transit Rahu at 18° 13' Aries/H10 was closely conjunct natal Rahu at 17° 47' Aries.
The nodal conjunction is considered one of the most painful aspects to be experienced when stationary. While this aspect was not stationary, we must also take into account that the operating sub-period was that of Rahu. As the sub-period lord was natally afflicted by Rahu and Ketu, some traumatic event could be expected. Ketu is the lord of a sudden eruption of fire with violent heat. Rahu rules crisis. It is said that Astronaut Grissom had complained that he space capsule was a fire hazard and he told his wife it was a "lemon". Rahu rules crisis that erupt after manipulation, such as papering over design flaws by those responsible for the administration. Importantly, the conjunction took place in the 10th house, which rule the executive branch of government.
- transit 6th lord Jupiter 5° 01' Cancer/H1 was closely afflicting its own natal placement at 4° 25' Scorpio/H5. The 6th lord is the lord of accidents and mishaps.
- natal 6th lord Jupiter at 4° 25' Scorpio/H5 aspected transit 8th lord Saturn at 2° 45' Pisces/H9. This is a classic aspect of violent events in this Cancer rising chart.
- transit 4th lord Venus was in 8th house, which was also closely aspected by transit Ketu.

In short, 'all the bases were loaded' for a traumatic event for the nation on January 27, 1967. 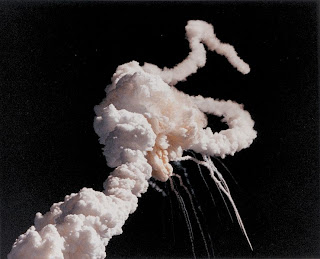 The Space Shuttle Challenger disaster occurred on January 28, 1986 when Challenger, a Space Shuttle operated by NASA, consisting of the Challenger Orbiter, an External Tank (ET) containing liquid hydrogen fuel and liquid oxygen oxidizer, and two Solid Rocket Boosters (SRBs), broke apart 73 seconds into its flight leading to the deaths of its seven crew members. The spacecraft disintegrated over the Atlantic Ocean, off the coast of central Florida, United States at 11:39 a.m. EST (16:39 UTC). The crew of seven were probably killed by impact of their crew compartment with the ocean surface, although they might have suffered lethal injuries from the forces of the disintegration.
Astrological dynamics 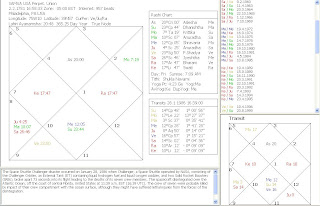 The Mercury-Jupiter period was operating.
- transit 8th lord Saturn at 14° 02' Scorpio/H5 was closely afflicting four transiting planets including the major period lord, Mercury, which also rules transportation and high technology activities.
* natal 3rd lord Mercury at 12° 05' Capricorn/H7
* transit Mercury at 12° 28' Capricorn/H7
* transit 2nd lord Sun at 14° 48' Capricorn/H7
* transit 4th lord Venus at 16° 57' Capricorn/H7
* transit 1st lord Moon at 17° 22 Leo/H2
The comprehensive affliction involving the lord of death is highly significant.
- transit 6th lord Jupiter, the sub-period lord, had just entered the 8th house and was at 0° 50' Aquarius, from where it received the aspect of transit 10th lord Mars at 3° 37' Scorpio/H5. Importantly, transit Mars was thus also exactly conjunct natal Jupiter at 4° 25' Scorpio/H5. As Mars rules the astronauts of the US space program, this contact is highly important to explain the tragic loss of life in this manned space flight event.

In sum, the chart explains this tragedy very well. 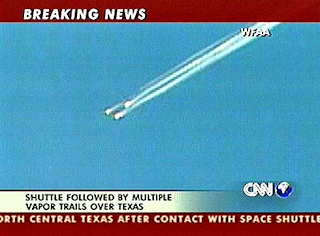 The Space Shuttle Columbia disaster occurred on February 1, 2003, when the Space Shuttle Columbia disintegrated over Texas during re-entry into the Earth's atmosphere, with the loss of all seven crew members, shortly before it was scheduled to conclude its 28th mission, STS-107. The shuttle was scheduled to land at 9:16 a.m. EST. At 8:59:32 am – a broken response from the mission commander was recorded: "Roger, uh, bu - [cut off in mid-word] ..." It was the last communication from the crew and the last telemetry signal received in Mission Control.
Astrological dynamics 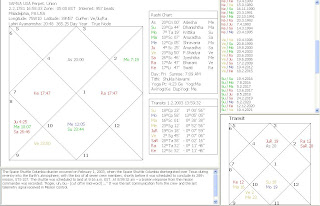 The Venus-Mars period was operating. Mars rules astronauts, who embody heroic qualities in life.
- transit Ketu at 12° 32' Scorpio/H5 was closely conjunct natal 10th lord Mars at 10° 07' Scorpio. A sudden tragic event took the life of the brave astronauts.
- transit Rahu at 12° 32' Taurus/H11 was closely aspecting natal 3rd lord Mercury at 12° 05' Capricorn/H7. A crisis involving transportation, high tech activities and communcation erupted.
- transit 8th lord Saturn at 28° 38 Taurus/H11 was closely opposite natal Saturn at 26° 46' Scorpio/H5. This aspect signals the risk of setbacks for death-defying activities.
- transit 6th lord Jupiter at 19° 18' Cancer/H1 was aspecting the 1st house of self, 5th house of creative activities, 7th house of short journeys and 9th house of luck. Importantly, Jupiter, Mars and Saturn are natally placed in the 5th house and Mercury and Sun are natally placed in the 7th house. Transit Jupiter also exactly afflicted transit 2nd lord Sun at 18° 23' in Capricorn/H7 and 1st lord Moon at 19° 58' Capricorn/H7.

The transit and period influences could not be any more telling about the danger of such an outcome.
Space shuttle Endeavour to land Sunday, November 30 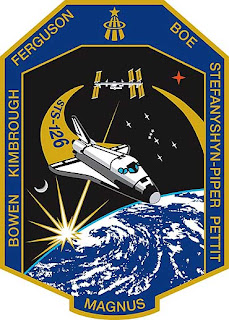 STS-126 is the current space shuttle mission to the International Space Station (ISS) which is being flown by Space Shuttle Endeavour. The purpose of the ISS mission, named ULF2, is to deliver equipment and supplies to the station, to service the Solar Alpha Rotary Joints (SARJ), and repair the problem in the starboard SARJ that has limited its use since STS-120. STS-126 launched on November 14, 2008 at 7:55:39 p.m. EST from Launch Pad 39A at NASA's Kennedy Space Center with no delays or issues. Endeavour successfully docked with the station on flight day three.
What do the transits suggest concerning the scheduled landing of the space shuttle Endeavour at Kennedy Space Center, Fla., Sunday at 1:19 p.m. ?
Astrological dymanics 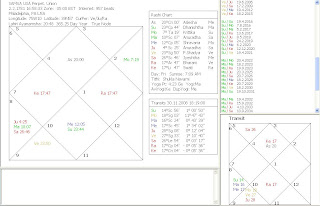 At that time of landing, the Venus-Jupiter period is operating.
- transit 8th lord Saturn in the SAMVA USA chart will be closely afflicted by natal Saturn and also still afflicted by transit Jupiter.
The manned flight in the US space program is linked to 8th lord Saturn in the chart. This is because it is linked to the death-defying nature of the effort even if the missions have by and large been successful. This planet has been very much involved in transit at important times in this program, both successful and catastrophic.
-the close affliction of transit 3rd lord Mercury and 10th lord Mars in Scorpio/H5 by transit Ketu in Cancer/H1
-the conjunction of transit 4th lord Venus with transit 6th lord Jupiter in Sagittarius/H6, indating events that disturb the communal harmony.
In short, the transit and period suggest there are risks to the mission, since the major indicators, Mercury, Mars and Saturn, are all afflicted at the present time. However, afflictions indicating risk have also been present in the major achievements. Hence, we can offer our hopes and prayers for the brave people involved who perform tasks at risk to their wellbeing that ultimately expand the existential possibilities of humanity in outer space.