Houston, we've had a problem!

One significant event yet to be examined in terms of the SAMVA USA chart is the famous and near disastrous space flight of Apollo 13. During the five day flight, the lives of the three crew members came close to ending but were narrowly saved through intense efforts and human ingenuity by the crew themselves and the determined ground personnel. This event gripped the attention of the American people and was later the subject of a famous movie by the same name. 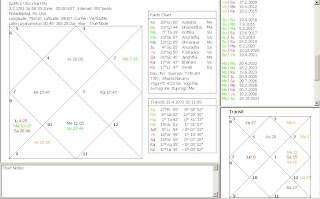 Apollo 13 was the third manned mission by NASA which was intended to land on the moon, but a mid-mission technical malfunction forced the lunar landing to be aborted. The crew members were Commander James A. Lovell, command module pilot John L. "Jack" Swigert, and lunar module pilot Fred W. Haise. The Mission duration was 5 days, 22 hours, 54 minutes and 41 seconds. 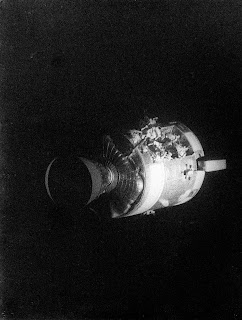 Two days later, at 03:07:53 UTC on April 14, while the mission was en route to the moon and 321,860 km away from Earth, a fault in the electrical system of one of the Service Module's oxygen tanks produced an explosion which caused a loss of electrical power and failure of both oxygen tanks. The command module remained functional on its own batteries and oxygen tank, which were only designed to support the vehicle during the last hours of flight. The crew shut down the Command Module and used the Lunar Module as a "lifeboat" during the return trip to earth.

The closest approach to Moon took place at 00:21:00 UTC on April 15, when the craft came within 254.3 km of the Moon, which is possibly a record. Despite great hardship caused by limited power, loss of cabin heat, and a shortage of potable water, the crew returned safely to Earth, and the mission was termed a "successful failure." 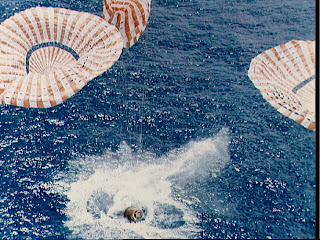 Astrology of the mission
The Saturn-Jupiter period was operating and the transit afflictions at the time of launch were numerous and significant.

- Natal Ketu in the 4th house in mutual aspect to transit Rahu in the 8th house
- Transit Ketu in the 2nd house in mutual afflicting aspect with natal Rahu in the 10th house.
As Ketu rules sudden explosions and Rahu rules gas, this is clearly one outcome consistent with these close transit-to-natal contacts
- Natal Rahu was conjunct transit Saturn, Mercury and Venus, with these planets also afflicted by transit Ketu in the 2nd house. In particular, transit 8th lord Saturn was in applying aspects during the crisis. The sudden onset of a life threatening crisis was the result.
- Natal 6th lord Jupiter in the 5th house was afflicting transit 10th lord Mars in 11th house, suggesting a technical malfunction. 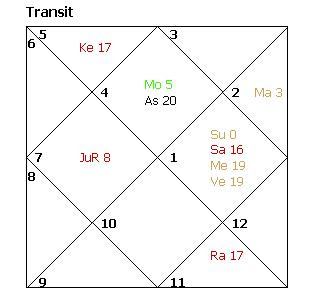 The many afflictions involving the FM planets natally or in transit at this time signify the danger for the crew and the resulting tension felt by Americans. The experience was also felt by people around the world, who witnessed the events as they transpired through the almost instantaneous global communication already in 1970.

As has been pointed out in other articles, the strong 10th lord Mars in the sign of Scorpio and in the 5th house of the SAMVA USA chart, under aspect from an exalted 1st lord Moon in the 11th house, explains the enormous fame of the country associated with achievements relying on technical know-how and courage. This is more so as Saturn, the 8th lord of obstacles and endings, aspects the Sun as 2nd lord of status in the chart. This aspect signifies that status is earned through “death-defying acts”. As a result, we see transit or natal Saturn and Mars prominently involved at times of great achievement, risk or tragedy involving such undertakings. 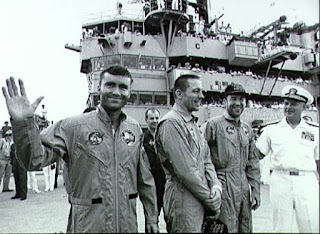 In sum, at the time of the launch on April 11, transit 10th lord Mars was infant in the sign of Taurus and hence weak in transit. At the time of the tank rupture on April 14, Mars was closely afflicted by natal 6th lord Jupiter, the sub period lord. 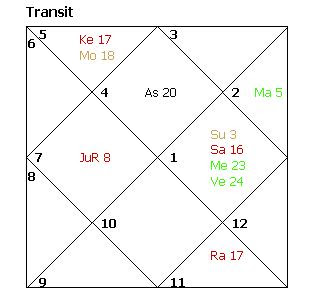 Posted by Cosmologer at 7:19 AM