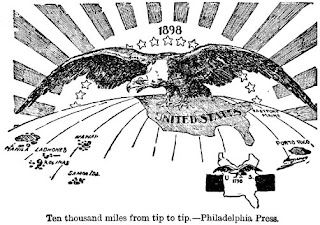 The emergence of the USA as a truly imperial power took place at the close of the 19th century. This 1898 political cartoon in the Philadelphia Press depicts the extension of the United States dominion as "Ten Thousand Miles From Tip to Tip". 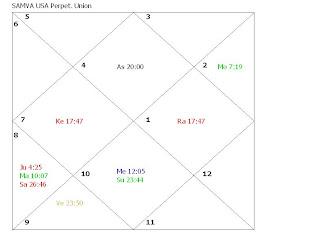 The exertion of US military power around the globe coincided with the first full major period of the Sun (April 19, 1896-to April 19, 1902) in the SAMVA USA chart (Perpetual Union). The Sun is strong and powerfully placed in the chart as 2nd lord of wealth and status on the most effective point of the 7th house ruling foreign policy. This is important, as the second major period of the Sun will commence in 2016, suggesting the USA will then assert its even greater influence in the world. A reading of history based on the earlier Sun period in the SAMVA USA chart is revealing in this regard. It is possible a new leadership in the US some years hence may even seek to expand into space to solve the economic and social problems at home.

Origins of the expansion
The founders of the USA planted the seeds of national greatness that has been the hallmark of the USA ever since.

"In his last years in office, an embattled President George Washington yearned for a time when this nation will possess the strength of a Giant and there will be none who can make us afraid."[1]

Scholars have debated why the U.S. became expansionist at the close of the 19th century. There are likely many reasons. By the late 19th century the U.S. had completed its "Westward expansion." The country had also been suffering from demand side problems in the economy since the Panic of 1873. This period has been termed "The Long Depression". The spell was not really broken until 1896, when monetary expansion surged ahead, helped by the "Klondike Gold Rush" in the latter half of the 1890s. In the famous work of Milton Friedman and Anna J. Schwarts on the monetary history of the United States, the following statement is fascinating in this regard

This coincides exactly with the six year run of the Sun major period in the SAMVA USA chart from 1896 to 1902. It is not a coincidence that such a mighty rebound occurred in monetary and economic conditions, which are a key indication of the Sun, during its major period.

In any event, some scholars suggest the expansion of US power around the globe was considered a way to get the U.S. economy out of its sluggishness and problems. Despite enormous economic development following the Civil War (1861-1865), when the US built up its industrial infrastructure and then its military strength, grave social problems had emerged giving rise to social conflict over festering inequality and social injustices. As the new century beckoned - and the Sun period began - these clouds began to lift. In the earlier article From Gilded Age to Progressive Era, this socio-economic and political shift has been explained. There were also external pressures in the 1890s that accelerated U.S. efforts to expand its naval capabilities, especially the rise of colonial powers in Europe. Importantly, such efforts went into high gear following the landslide election in 1896 of William McKinley as U.S. President, at the onset of the Sun major period. In the 1900 election, McKinley emphasised the benign nature of the expansion: "The American flag has not been planted in foreign soil to acquire more territory but for humanity's sake." 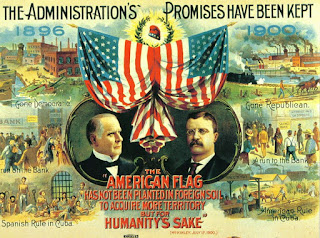 "United States expansionism had its roots in domestic concerns and economic conditions, as in other newly industrializing nations where government sought to accelerate internal development. Advocates of empires also drew upon a tradition of westward expansion over the course of the previous century. Economic depression led some U.S. businessmen and politicians from the mid-1880s to come to the same conclusion as their European counterparts — that industry and capital had exceeded the capacity of existing markets and needed new outlets. The "closing of the Frontier" identified by the 1890 Census report and publicized by historian Frederick Jackson Turner in his 1893 paper The Significance of the Frontier in American History, contributed to fears of constrained natural resource. Like the Long Depression in Europe, the main features of the U.S. depression included deflation, rural decline, and unemployment, which aggravated the bitter social protests of the "Gilded Age" — the Populist movement, the free-silver crusade, and violent labor disputes such as the Pullman and Homestead strikes. The Panic of 1893 contributed to the growing mood for expansionism. Influential politicians such as Henry Cabot Lodge, William McKinley, and Theodore Roosevelt advocated a more aggressive foreign policy to pull the United States out of the depression." [3]

Parallels to our own time

As in the latter decades of the 19th century, the US has been suffering from significant social and economic problems during the recent periods of Ketu (1989-1996) and Venus (1996-2016). A predicted U.S. resurgence will likely take place in the coming Sun major period (2016-2022). This could involve a re-exertion of U.S. military power in the world or a significant push to expand the frontier of space.

Economist & Author Ravi Batra has written a fascinating book, The Golden New Age, predicting major political reforms in coming years to resolve the social malaise of inequalities and economic problems. He mentions the election year 2016, which coincides with the beginning of the forthcoming Sun period, as potentially important in this regard.[4] He also suggests a historic shift in societal values from acquisitive to warrior like. In this regard we can think about the booming genre of action movies with super charged heros and the growing respect for people in uniform. Should they be considered a harbinger of such a social transformation? If history is anything to go by, Batra may well prove right, although the extent or timing of such socio-political changes is uncertain.