Greed and fear in astrology 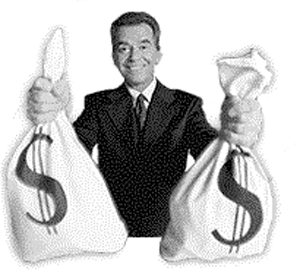 Greed and fear are among the most common of human emotions. In the world of finance and investing, greed and fear are considered major emotions in motivating the decisions and actions of traders. These emotions are explained by astrology.

Historically, greed has been considered a vice or a sin. In the USA in the 1980s, however, this emotion was increasingly considered the source of positive action in the world which not only bettered one’s own condition but also tended to increase the welfare of others.

The slogan "Greed is good" was made famous by the character Gordon Gekko in the movie “Wall Street.” This idea may have fed into the hype of investing that generated the recent bubble in asset prices.

Investment theories of greed
To understand the above statement, a short review of the role of human emtions in theories of investing is in order. Over time, it has become increasingly understood that greed tends to distort the appreciation of risk, sometimes to the point that people in the throes of the passion of greed ignore risk completely. More importantly, such emotions can spread and infect the collective mind-set. As more people become infected with greed they make decisions that feed and sustain a sense of euphoria in the market. By buying into the hype of easy gains, additional people invest and asset prices rise ever higher, pulling ever more more people into the fray. At some point, however, the situation no longer appears sustainable. This is when asset prices have reached very high levels and some unwelcome news alters the expectation. At that point, another emotion, fear, is not far away. Moreover, as the collective actions were not fully rational, people become increasingly uncertain about their investment decisions and begin to sell. Suddenly, the emotion of outright fear sets in and overwhelms the market place. At that point, formerly greedy traders become scared and see only risks. They dump assets and in doing so drive the prices down, feeding the monster that fear has become and panic spreads like wildfire. Just as the prices rose to lofty levels during the greedy phase, so are they driven to absurd lows in the fear phase. It is therefore seen that the emotions tend to bypass or distort rational thinking and motivate directly irrational or risky decisions and actions.

The ideas of economists have been influential in bringing about this situation. In the 1960s, economist Eugene Fama became famous for advancing the “Efficient Market Hypothesis” suggesting that investors are completely rational in interpreting and acting on market news and information. This assumes that any price that stocks may take is rational, and that it reflects some fundamental value as inferred by the mass of investors. If one believes this, even absurdly high prices are interpreted as 'rational'. More recently, economists have begun to question if investors expectations about the future are always rational, notably as they tend to be motivated by human emotions. Authors like Hersh Shefrin suggest that the behavior of investors becomes biased due to human emotions, including also the behavior of professional investors. Biases lead to errors. The way decisions are framed influences attitudes toward risk. Together, these emotions create trading behavior that is not always consistent with rational expectations and market efficiency. Shefrin finds that ‘rational’ people can look at ideas and apply their own bias and still be regarded as rational! The result is that irrational extremes in consensus expectations are indirectly reflected in generally overvalued and undervalued stock prices at major tops and bottoms, respectively.

The astrology of greed and fear
In astrology, we can see the influence of Rahu and 8th lord in a chart as increasing the desire for worldly benefit. While Rahu is associated with the deceiving nature of greed that may generate crisis it is the 8th lord that has an influence to give “easy gains” but also to remove things, by being the lord of obstacles and endings. It is also greed that draws people into investment scams. The promises of untold riches lead people to invest in get-rich-quick schemes. The investment scandal involving Bernard Madoff, the financier to royalty and the super wealthy, has cost investors close to $50 billion. Sadly, one investor in his fund even committed suicide.

Greed and fear in the SAMVA USA chart 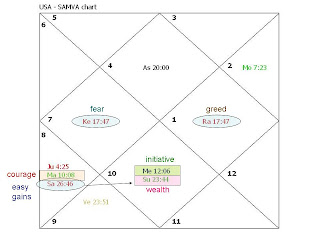 In the SAMVA USA chart (Perpetual Union) both Rahu and 8th lord Saturn are influential to explain the cycles of euphoria and panic in the US financial markets. Rahu influences the most effective point (+/- 5° from the ascending degree) of the 10th house, afflicting also the 2nd house of wealth, the 4th house of fixed assets and 6th house of debt. Collective periods of greed can lead to setbacks for all these indications. Saturn, as 8th lord of easy gains as well as obstacles and endings, afflicts the Sun in the chart, as the 2nd lord of wealth. As such, Saturn can result in the problems for wealth in the country. Moreover, due to the influence of the 2nd lord Sun on the 7th house, the conditions on US financial markets tend to have repercussions around the world.

The placement of the planet of sudden, violent events, Ketu, in the most effective point of the 4th house, which rules mental calm, is the source of panic in US asset markets. More so, as the 4th lord Venus is placed in the 6th house of financial stability. However, as Mercury, the 3rd lord of initiative, is well placed and Mars as the general indicator of courage is supremely strong and well placed in the chart, the US has abundant reserves of courage. Episodes of the fear thus tend to be short lived. This is seen in the fact that after collapses of investor confidence, the cycle of boom and bust begins anew, with investors again beginning to "climb a wall of worry".

Bursting of the bubble
Recent months have witnessed a destruction of wealth of a scale only before seen in the greatest stock busts of US history, most recently in the Great Depression of the 1930s. The fear in the market became palpable around October 10, 2008 when many investment prognosticators thought the US stock market was about to melt down completely. The fear spread around the planet, with stock markets in most countries diving to new lows after many banks went bankrupt. 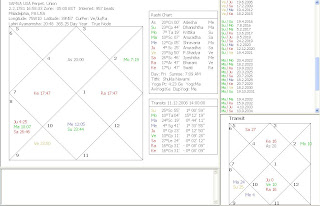 The predictions made on the basis of this chart have indicated such an outcome, as discussed in The banking crisis of 2008 and the SAMVA USA chart, More accurate stock market predictions and Financial crisis becoming entrenched. The chart indicates that the economic recovery will be slow in coming.

Stephen Greenspan, "Fooled by Ponzi (and Madoff) How Bernard Madoff Made Off with My Money" in the Dec. 23, 2008 edition of the email newsletter eSkeptic.
http://www.skeptic.com/eskeptic/08-12-23.html#feature