Predictions for the USA in 2012 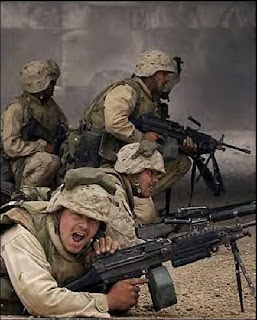 To predict what to expect in the USA during the year 2012, the period and transit influences in the 20° Cancer rising SAMVA USA chart (Perpetual Union) are examined. Among the salient insights is that the year 2012 will likely be easier than recent years. This is due in part to a change to a more auspicious sub-period in April and to less difficult transit strains seen. While the weakness associated with the bursting of the housing bubble will remain for some more years, the focus will shift from concerns about the sluggish economy to diplomatic and business initiatives around the world. There is plenty of conflictual energy seen this year, which could be associated with high profile court cases or military involvement. The end of the year may see growing problems concerning communal harmony.
Trend change in April
The SAMVA USA chart is running the Venus major period until April 2016. As Venus is the weakest planet in the horoscope, the conditions of financial instability associated with the bursting of the housing bubble will remain for some years. In April 2012, a change in sub-periods takes place, from the Saturn sub-period (February 16, 2009 - April 19, 2012) to the Mercury sub-period, suggesting a shift in the collective emphasis. In recent years, the focus has been on on the indications of Saturn as 8th lord placed in the 5th house of the horoscope in marginally weak strength. As a result, the focus has been on e.g. the sluggish economy and high unemployment. On the upside, the transit of Saturn through the sign Virgo and 3rd house has been associated with better employment conditions in the IT sector, linked to many innovations there. On November 15, 2011, transit Saturn passed into the sign Libra, which is expected to bring easy gains relating to land or natural resources. When Saturn is afflicted in Libra, some setbacks may take place in property matters and communal harmony. As Mercury is 3rd lord and sun-like planet in the 7th house of the chart, from April a shift in emphasis is expected towards advances in high tech activities driving economic developments and increased diplomatic activities of the US government

A tense beginning
From January 1 to mid February 2012, transit 8th lord Saturn and transit 6th lord Jupiter will be in opposition aspect, while Saturn is stationary around 5° Libra and 4th house. While this aspect is not otherwise afflicting in the chart, problems involving violence and financial instability are expected at the beginning of the year. There could be problems to land and natural resources, collective harmony as well as international trade and government administration. Such problems would be more pronounced in the first half of January, when transit 10th lord Mars and transit 4th lord Venus, dispositors of Saturn and Jupiter, are both afflicted by natal Saturn as 8th lord of obstacles and endings. The continuing transit nodal station in MEP of 5th and 11th houses, involving the morals and ethics of the people, which lasts until mid February 2012 would add to the problems in early 2012.
Long transits of fast moving planets
In the first five months of 2012 transit Mars will be in Leo and 2nd house. This is a good placement for Mars as 10th lord of government cabinet and foreign trade and as general indicator of courage and the military and police. From April to July, Venus will be placed in the sign of Taurus and the 9th house. This is good for the functional indications of Venus as 4th house of property matters and communal harmony and the general indications of luxuries, including air travel. From June to August, Mercury will be transiting the sign of Cancer and 1st house. This is good for the indications of the 3rd house, such as communication, transportation, courage and initiative as well as the general indications of high tech activities and analysis - especially as the Mercury sub-period will be operating.
Slow moving transit influences 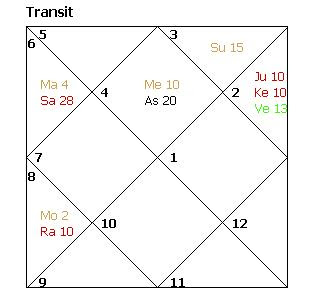 The transit nodes will be conjunct/opposite natal 10th lord Mars from April through July 2012. This transit could bring strains for foreign trade, government administration, the military and police. Some challenge for law and order is likely. This could also indicate problems with economic conditions elsewhere. As Mars is strong in the chart, the strains will not result in a setback to these indications. On May 17, Jupiter will move into the sign Taurus and 11th house. This sign and house would be good for its indications, however, when Jupiter becomes conjunct the Moon and opposite planets in Scorpio, it would bring short lived conflictual energy to their indications. In late June (see transit chart) and early July, Jupiter will become conjunct transit Ketu, adding to the problems for the indications of the ongoing nodal affliction. There could be military activity around this time. In June and July 2012, transit retrograde Saturn moves into Virgo, where it afflicts natal Saturn. While the aspect is not of an exact orb, it could bring additional problems related to government communication with the people and easy gains. In September and October, 6th lord Jupiter will become stationary at 21° Taurus and the 11th house. This suggests conflict, even high profile court cases, involving the indications of the 11th house, such as the income, friendships and goals of the country, as well as the indications of the 3rd house of communication, 5th house of entertainment and 7th house of foreign relations. Of course, in a year with Presidential elections, this also suggests the campaign will become especially contentious at that time. During the last three months of the year, transit stationary Rahu and Ketu will be at 2° Scorpio and Taurus, respectively. From the late summer months, the nodes will have begun to afflict natal Jupiter as 6th lord at 4° 25' Scorpio and 5th house, also suggesting problems involving conflict.
.
Problems at the end of the year
As the year ends, transit 8th lord Saturn will be in applying conjunction with natal Ketu at 17° 47' Libra and 4th house and opposite natal Rahu in Aries and 10th house. This suggests problems for communal harmony, possibly along racial or ethnic lines, as well as the government, foreign trade and law and order. However, the problems will likely be felt more in early 2013 when Saturn becomes stationary at 17° 30' Libra.
Posted by Cosmologer at 6:16 AM