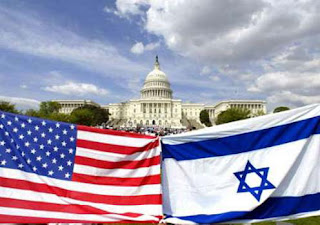 Astrology opens up a window on many mysteries in life. In the God-centered astrology of the Vedas, all living things follow some destiny based also on their decisions involving free-will. This holds true at the level of the individual as well as the collective. In SA mundane astrology, the karmic destiny of nations may be read from their authentic horoscopes with a robust astrology method like SA. 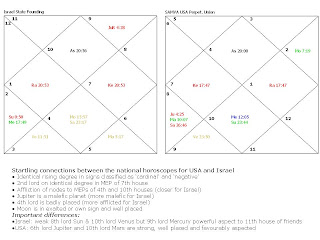 Important similarities between horoscopes can point to some shared destiny. In this regard, please note the number of stunning connections between the authentic horoscopes for the USA and Israel. Both the 21° Capricorn rising chart for Israel and the 20° Cancer rising chart for the USA have been rectified on the basis of SA astrology, including with repeat accurate predictions. While placements in one chart against another are normally not considered as having significance in SA astrology, there are cases were such an analysis is warranted. Let us explore why and how.

Ties that bind
The placement of the 2nd lord in the same degree in opposite signs of the MEP of the same 7th house in both charts reveals a shared importance in international affairs. However, the fact that the 2nd lord is the Sun in the chart of the USA shows its comparatively greater authority and importance in international affairs. In the chart for Israel the 2nd lord is Saturn, which is a contracting planet, reflecting also ancient things. Hence, Israel's influence in these countries is primarily linked to it being the cradle of the Judeo-Christian faiths. In both charts, Jupiter, the planet of the divine is having an influence in the charts. In the case of the USA, it aspects the 1st lord of self, showing that American's tend to be of a religious view. The fact that Jupiter there is 6th lord, infuses the sentiments with some fixity. In the case of Israel, Jupiter is 12th lord placed in the 12th house, giving some sense of separation to the religious influences. The aspect of Jupiter to the 4th lord Mars, also suggests some upsets in the collective life in relation to the religion. This can be seen in the fact that Israel is surrounded on all sides by those beholden to Islam. Adding to the sense of separation is the fact that the Israeli state is a secular one based on the Jewish faith. 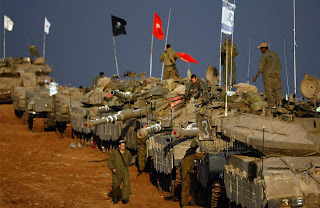 Both countries also have to contend with the malefic Moon's nodes being placed on the MEP of the 4th and 10th houses - afflicting the other even numbered houses. This gives frequent upsets to collective life and the executive government. Sadly, life in Israel seems to be one of a constant siege. The USA has given Israel significant financial and military support since its founding.

Differences cement the ties
Interestingly the differences in the horoscopes also help to explain the ties between these two countries. First, let us note that Israel has a weak 8th lord Sun and 10th lord Venus. The lack of a state authority and a powerful executive create a vacuum in the public life. However, the 9th lord Mercury is strong and well placed in the most effective point of the 5th house of creativity and management from where it powerfully aspects the 11th house of friends. This reveals that the state of Israel is karmically destined to have the help of a strong friend or friends. Indeed, the USA but also many European countries have been backers of Israel since its founding. In the case of the USA, it has 6th lord Jupiter and 10th lord Mars that are strong, well placed and favourably aspected.

The 24th degree in Cancer and Capricorn 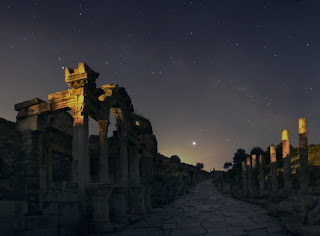 When the functional malefic Jupiter becomes stationary conjunct either 24° Cancer or 24° Capricorn, where the 2nd lord is placed in both the horoscope of Israel and USA, this area of life becomes caught up in strain. As the placement involves the 7th house, the common focus on the area of foreign policy. At such times, both nations become engaged in similar problems. Of course, the nature of the problems is slightly different based on the functional malefic nature of Jupiter in the charts and its placement either in the 1st or 7th houses in transit. For Israel, this transit affliction creates problems with 12th house issues of e.g. "loss" of status in foreign policy sphere, whereas for the USA, the problem has more to do with the 6th house issues of e.g. "conflict" involving the nation's status in foreign policy.

Importantly, as Israel does not have a strong Sun or Mars, but a phenomenal yoga concerning friendship, it receives steady military support and political backing from the USA which has a world class military and state authority.

Problems in the Autumn of 2009 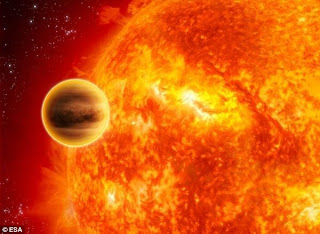 In the fall of 2009, when transit debilitated Jupiter becomes stationary at 24° Capricorn, both countries are expected to experience a prolonged problem. Israel is likely to experience some crisis in the area of foreign policy and relations with neighbors, while the USA will likely endure strains related to that as well as other problems.
Posted by Cosmologer at 1:34 AM