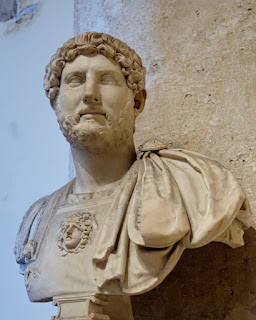 The Roman Emperor Hadrian, was born Publius Aelius Hadrianus on 24 January 76 AD in Italica, Spain. He died on 10 July 138 AD in Baiae, Italy. He was emperor of Rome from 117 AD to 138 AD, as well as a Stoic and Epicurean philosopher. The famous Roman military fortification in England, Hadrian's Wall was erected during his reign and shows the reach of the Roman empire at that time. What is of interest for astrologers is that a pictorial representation of his horoscope survives and it is the same as the North Indian horoscope format.

The life of Hadrian
Hadrian was from a well-established family which had originated in Picenum in Italy and had subsequently settled in Italica, Hispania Baetica, also known as the republican Hispania Ulterior, near the present day location of Seville, Spain. His predecessor Trajan was a maternal cousin of Hadrian's father. Trajan never officially designated a successor, but, according to his wife, Pompeia Plotina, Trajan named Hadrian emperor immediately before his death. Trajan's wife was well-disposed toward Hadrian: Hadrian may well have owed his succession to her.

Hadrian's presumed indebtedness to Plotina was widely regarded as the reason for Hadrian's succession. However, there is evidence that he accomplished his succession on his own governing and leadership merits while Trajan was still alive. For example, between the years AD 100–108 Trajan gave several public examples of his personal favour towards Hadrian, such as betrothing him to his grandniece, Vibia Sabina, designating him quaestor Imperatoris, comes Augusti, giving him Nerva's diamond "as hope of succession", proposing him for consul suffectus, and other gifts and distinctions. The young Hadrian was Trajan's only direct male family/marriage/bloodline. The support of Plotina and of Licinius Sura (died in AD 108) were nonetheless extremely important for Hadrian, already in this early epoch.[1] 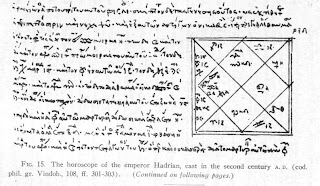 The horoscope of Hadrian has survived in at least three manuscripts. The imperial horoscope came down to us from Hephestian of Thebes, who, in the fourth century AD excerpted it with some others from the collection of historical horoscopes compiled by Antigonus of Nicaea. According to ancient sources, the imperial horoscope was well studied by prominent authors who stated that "...Hadrian - whose horoscope is absolutely certain - surely was born in southern Spain.”[4].

A salient difference is that the Roman horoscope had the first house placed in the left-diamond, which would be consistent with the modern Western placement. The Greek symbol for Hora=Hour is in that quadrant. The house ordering the follows in a counter-clock manner.

The delineation of the horoscope proceeds to discuss the Moon/Jupiter conjunction in Aquarius. Hadrian is reported to have been so expert as an astrologer as to have claimed he knew his own future.[5]

Based on the birthday of 24 January 76 AD we find the following placements in the sidereal zodiac at midnight:

In the horoscope the sign Aquarius is seen in the left-diamond. Shortly after midnight on this day, the sign Scorpio rises. During the night Sagittarius then rises, followed by Capricorn. At 8 in the morning Aquarius is seen to be rising.

What is interesting in this regard is the fact that the Moon is seen to have moved into the following sign of Pisces when Aquarius rises in the sidereal zodiac, but not in the tropical. If the astrologers cast their charts with tropical, the statement is correct but not if it was cast with sidereal, then the Aquarius ascendant becomes incompatible with the above statement. This suggests the calculation was done in tropical. In any event, the Roman horoscope was drawn in the same format as the North Indian chart, but with the ascendant in the left-diamond of the chart, as has then continued in the Western tradition.

Conclusion
While the Roman astrologers drew their horoscopes in the same horoscopic format as Indian astrologers have done for millennia and still do today, they evidently placed their ascending sign on the left side of the chart, a tradition that has survived into modern times in the West. Nevertheless, it is shown that the Indian and Hellenic horoscopic traditions of astrology are linked, while important aspects of this tradition were lost to modern Western astrology as the living link to the Hellenistic tradition was severed during the dark ages. At least, what we know today is that after astrology was reformed in Europe in the late middle ages and then continued to develop, it became inconsistent with its ancient forerunners. The most vibrant link to the ancient Hellenistic astrology tradition in the modern age is the astrology of India.