The removal of injustice 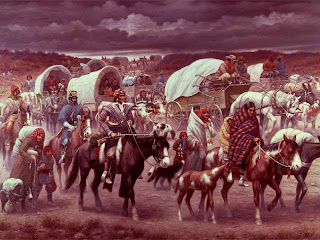 A major part of early 19th century US history is the sad tale of abuse of non-white peoples by people of European origin. The abuse ranged from the forcible removal of native peoples from their ancestral homelands east of the Missisippi to lands west of it. There was also the continued practice of slavery, even after the importation of slaves became illegal in 1808. This was due to economic advantages of slavery to plantation farmers in the Southern states. With Westward expansion, many slave families were torn asunder due to the westward migration of their old or new owners. There was also systematic abuse of Chinese immigrants in the mid 19th century. In this article we examine the Systems' Approach astrology of the removal of the Indians.

Indian Removal
Prior to the 19th century, with some exceptions, the white settlers signed treaties with Indians mostly for the purpose of ending hostilities with them, drawing new territorial lines between them or to establish the exchange of land for money. As a result, the white settlers gradually encroached on the lands of the many small tribes, especially in the northern seaboard states of the USA. In the 19th century, the push for space became more one-sided and less just as the white man grew in strength. At the start of the nineteenth century a clear cut policy was adopted by the government of the United States to remove Native American tribes living east of the Mississippi River to lands west of the river. It is interesting that the Rahu major period began in 1799 and it lasted until 1817. During this time, the deceptive practice of pushing the indians off their lands took on a more sinister facade. Rahu is placed in the most effective point of the 10th house of the SAMVA USA chart and aspects the 2nd house of wealth and status, 4th house of land and natural resources and 6th house of conflict and health. As such, its periods and transits can inflict harm on these indications, as well as those touched in stationary (or slow moving) transit. 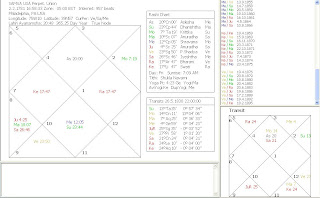 It was in the 1830s that the indian removals picked up pace. On May 26, 1830, President Andrew Jackson signed into law the Indian Removal Act. This law mandated the removal of the native peoples. The Jupiter major period and Mars sub-period was operating. The transit influences in the SAMVA USA chart on this bleak day were quite stunning in their maleficience. Transit 8th lord Saturn was conjunct the most effective point of the 1st house giving easy gains through an amoral deed, with Saturn also aspecting the natal 2nd lord Sun, suggesting the influence also affecting the leader of the country. In fact, it was President Jackson who became known for his cunning dealings with the Indians in order to remove them to open up space for the white settlers. In addition to the influence of Saturn, transit 6th lord Jupiter was conjunct natal 4th lord Venus in the 6th house. This aspect suggests that conflict over land issues or that conflict undermines the communal harmony. To add to the strain of the above, both natal Venus and transit Jupiter were under the aspect of functional malefic transit Rahu in the 2nd house, suggesting that manipulation was involved in this process, further undermining the communal harmony. Jupiter was also aspecting Rahu suggesting violence. With both malefic planets harming the ruler of land and natural resources, we can see the signature of a brutal grab for land.

Removal of five civilized tribes
In 1830, some of the "Five Civilized Tribes" — the Chickasaw, Choctaw, Creek, Seminole, and Cherokee — were still living east of the Mississippi, while others had already moved to the Native American Territory. They were called "civilized" because many tribesmen had adopted various aspects of European-American culture, including Christianity. The Cherokees had a system of writing their own language, developed by Sequoyah, and published a newspaper in Cherokee and English. In spite of this acculturation and acceptance of the law, the position of the tribes was not secure. Many white settlers and land speculators simply desired the land that was occupied by the tribes. Others believed that the presence of the tribes was a threat to peace and security, based on previous wars waged between the United States and Native Americans, some of whom had been armed by enemies of the United States, such as Great Britain and Spain.

Trail of Tears
The forcible removal of Native Americans in the United States from their homelands to Indian Territory (present day Oklahoma) in the Western United States has also been called the Trail of Tears. The largest indian removals occurred in the Southern states. They involved around 70,000 indians of which 10,000-15,000 died from illness and around 1,000 from hostilities while resisting removal. The five treaties involved were as follows:
- 1830: Dancing Rabbit Creek Treaty, Choctaw indians (emigration from 1831 to 1836)
- 1832: Cusseta Treaty, Creek indians (1834-1837), led to Second Creek War
- 1832: Pontotoc Creek Treaty, Chickasaw indians (1837-1847)
- 1832: Payne's Landing Treaty, Seminole indians (1832-1842), led to Second Seminole War
- 1835: New Echota Treaty, Cherokee indians (1836-1838)
.
The first four treaties took place during the dual malefic period of Jupiter-Rahu, highlighting manipulation motivated by strong desire to obtain something, even by unfair means. The Treaty of New Echota, which represented the most egregious violation of the stated intention of the removal policy took place under the Saturn-Saturn period. Even if this treaty was signed by a dissident faction of Cherokees but not the elected leadership, President Jackson rigidly enforced it. The removal resulted in the deaths of an estimated 4,000 Cherokees on the Trail of Tears. About 17,000 Cherokees, along with approximately 2,000 enslaved blacks held by Cherokees, were removed from their homes.

Indian wars
The Second Seminole War broke out in 1835 when the Seminoles refused to leave Florida. Also known as the Florida War, the conflict lasted to 1842. The most important leader in the war was Osceola, who led the Seminoles in their fight against removal. While based in the Everglades of Florida, Osceola and his band used surprise attacks to defeat the U.S. Army in many battles. The Dade Massacre took place on December 28, 1835 when Seminole fighters ambushed and killed 110 US soldiers. In 1837, Osceola was seized by deceit upon the orders of U.S. General T.S. Jesup when Osceola came under a flag of truce to negotiate peace. He died in prison. The Seminoles continued to fight. Some traveled deeper into the Everglades, while others moved west. The Second Creek War of 1836 was a conflict fought between the Creek people and land speculators and squatters in Alabama in 1836. These tragic wars broke out during the dual-malefic Saturn-Saturn period. It is estimated that the indian removal opened up 25 million acres to white settlers. As an 8th house influence, the new land certainly represented an 'easy gain' for the white settlers, but it was achieved in the wrong way. The mal-treatment of these peoples can not be undone, as the harm is done. However, looking forward we can use their memory as inspiration. Their existence and way of life lives on as a light to present and future generations; a reminder for us to ever seek to remove injustices from the national life.

Epilogue
It is noteworthy that during the first half of the 19th century, abuses of non-white peoples by the fast growing white population became a pronounced feature of national life in the United States. This is when the three malefic major periods ran consecutively in the 20° Cancer rising SAMVA USA chart. The major period of functional malefic Rahu ran from 1799 to 1816. The period of 6th lord Jupiter was in operation from 1816 to 1833 and the period of 8th lord Saturn ran from 1833 to 1852. It is no coincidence that such difficult incidents took place at that time. However, the cosmic pattern seen in the birth chart of the country also shows that the fight to abolish slavery picked up speed in the Mercury major period, involving as it did a bloody civil war to permanently expunge the evil practice from the national life. It is testament to the national character of Americans, that there arose a backlash against the injustices and slavery was abolished. The most prominent leader of the fight to free the slaves was Abraham Lincoln, who is now revered as the greatest President in the nations history. After more than two centuries of a constant struggle, all races now broadly enjoy equal rights. With Ketu afflicting the 4th house and 4th lord Venus badly placed in the 6th house, injustices and resultant lack of communal harmony are, however, likely to be a part of the national experience in one form or the other. Further efforts are therefore likely to be required to remove injustices. One such battle rages today; to limit the desire of large corporations for maximum profit in order to ensure that families with low incomes can also obtain basic health care.