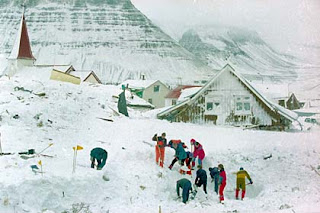 In the article Land of ice and fire on April 26, 2010, the tentative but likely authentic chart for Iceland was presented. Work on this chart is ongoing, but so far several predictions made on the basis of this chart have proved accurate. In this article the predictions are reviewed and some historical events examined.

Prediction update
On April 27, 2010, Astrologer & Author V K Choudhry made the following prediction based on the new horoscope for Iceland:

"Worsening of situation is seen on 4th and 5th May, 2010. There can be possibility of additional stress of volcanic erruption."

This prediction was realised, with the plume increasing in height and ash emissions intensifying from May 4 to May 6 and subsiding thereafter.[1]

On April 16, 2010, Cosmologer made the following prediction based on the chart.

"It is likely the natural event taking place will be felt [for some months] ... also as the transit nodes will become stationary in the MEPs of the houses they now occupy."

This prediction has also been realised as the eruption ceased by June 6th, 2010. The cleanup efforts took place during the summer. Due to the flight disruptions in countries bordering the Atlantic ocean in April, tourism to Iceland was reduced during the Summer. By the fall of 2010, the situation was returning to a sense of normalcy in the areas most affected by the eruption, although some displacement of population in rural areas near to the volcano had taken place.
.
When the financial crisis aftershocks reverbrated in early October 2010 the following was predicted on October 5, 2010:

"With this aspect being shortlived, we could thus expect the sudden spike in tensions to recede rather quickly."

Indeed, this has been the outcome. The tensions died down shortly afterwards as the transit affliction lifted.

Tragedies in the West Coast of Iceland 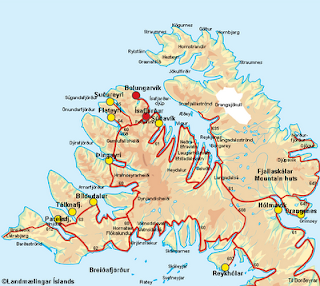 In this article we examine three tragedies of a similar nature, which took place during the major period of Saturn.

First we may note that Iceland has a small population of only around 300.000 people. As such the death of only 10 people is proportionate to 10,000 people being lost in the USA, which has a population that is one thousand times larger than in Iceland.

Astrology of the events 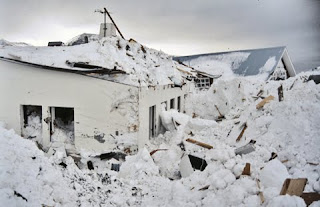 The Saturn major period was operating from 1981 to 2000. Saturn is 4th lord of real estate, natural resources and communal harmony. It is placed in the 8th house of obstacles and endings. Saturn is in infancy and thus weak in the chart. A mildly favourable influence is its conjunction with Moon as 9th lord of fortune, also in infancy in the 8th house. This placement explains why Iceland is fortunate to some extent with respect to its “real estate“ and natural resources but also that these are beset by obstacles in terms of harsh weather conditions, a threatening sea and frequent volanic disturbances. During the Saturn major period there were some national tragedies involving snow avalanches. Saturn is also a significator of cold things.

Let us examine the astrology of these two events. First, let us note the very difficult natal affliction in the chart involving 6th lord Mars being conjunct Rahu in the 9th house. Mars is dually afflicted by its placement on the nodal axis. Moreover, Mars also afflicts the nodes, This is quite difficult karma for financial instability and accidents. During the major period of Saturn, accidents involving loss of life were prominent in the collective experience. 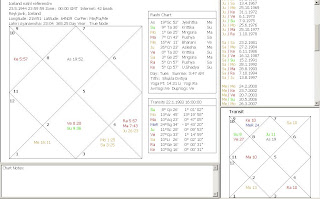 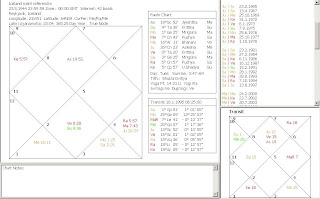 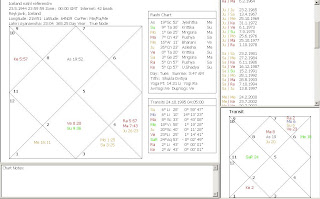 Saturn-Rahu period was operating, with transit stationary Rahu at 2° Libra and 12th house aspecting natal Saturn and Moon in the 8th house from August /September 1995 to December 1995/January 1996. On that day, transit Moon and Sun were at 6° Libra where they were conjunct transit Rahu and under afflicting aspect from 6th lord Mars in the 9th house.
.
Clearly, the periods and transits explain these events very well.

Conclusion
The new horoscope for Iceland is demonstrating success so far, both in explaining the history of the young Republic, but also as a basis for future predictions. Repeat accurate predictions are the true proof of the authenticity of any mundane horoscope.

References
[1] Eyjafjallajokull eruption in 2010
http://en.wikipedia.org/wiki/2010_eruptions_of_Eyjafjallaj%C3%B6kull
Posted by Cosmologer at 3:09 PM