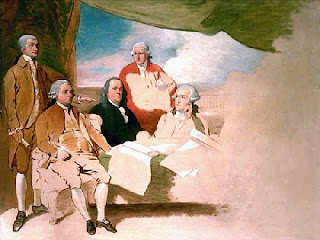 There numerous notable events in US history that warrant careful astrological examination in terms of the SAMVA USA chart. Two events of major importance for the new nation were the Surrender of Cornwallis and the Treaty of Paris.

The surrender of Cornwallis
The Siege of Yorktown or Battle of Yorktown in 1781 was a decisive victory by combined assault of American forces led by General George Washington and French forces led by the Comte de Rochambeau over a British Army commanded by Lieutenant General Lord Cornwallis. It proved to be the last major land battle of the American Revolutionary War in North America, as the surrender of Cornwallis's army prompted the British government eventually to negotiate an end to the conflict....After two days of negotiation, the surrender ceremony took place on [October] the 19th, with Cornwallis being absent since he claimed to be ill. With the capture of over 8,000 British soldiers, negotiations between the United States and Great Britain began, resulting in the Treaty of Paris in 1783.[1]

A few things may be noted about the astrology of this event.
.
Astrology of military victory 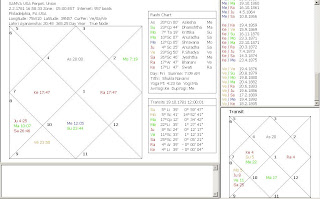 As per the SAMVA USA chart, the Sun major period was operating from April 18, 1776 to April 19, 1782. However, the SAMVA USA chart really only begins on February 2, 1781, when Maryland became the 13th and final state to pass the Act to ratify the Articles of Confederation and Perpetual Union. That said, the Sun major period was operating when the USA effectively won the American Revolutionary War with the surrender of Cornwallis at Yorktown on October 19, 1781. The Sun period is highly significant due to the strong and well placed Sun in the SAMVA USA chart. As a result this period is expected to bring forth power and status in foreign policy linked to a natural authority for the country. The sub-period was that of 4th lord Venus in the 6th house, which suggests the collective harmony and fixed assets, including land, are caught up in a conflict. The transits on this day are mixed, showing the enormous difficulty the conflict had brought (transit debilitated 2nd lord Sun in separating conjunction with transit Ketu, transit Saturn conjunct natal Saturn, transit 1st lord Moon conjunct natal 6th lord Jupiter, Transit 6th lord Jupiter opposite natal 1st lord Moon), but also the enormous relief (transit 4th lord Venus conjunct natal 10th lord Mars, transit 10th lord Mars in MEP of 7th house, transit 3rd lord Mercury in 4th house MEP)
.
Path to peace
Although Cornwallis' surrender at Yorktown in the Fall of 1781 marked the end of the Revolutionary War, minor battles between the British and the colonists continued for another two years. Finally, in February of 1783 George III issued his Proclamation of Cessation of Hostilities, culminating in the Peace Treaty of 1783.

In September 1782, Benjamin Franklin, along with John Adams and John Jay, began official peace negotiations with the British. The Continental Congress had originally named a five-person committee--including Franklin, Adams and Jay, along with Thomas Jefferson and Henry Laurens--to handle the talks. However, both Jefferson and Laurens missed the sessions--Jefferson had travel delays and Laurens had been captured by the British and was being held in the Tower of London. The U.S. delegation, which was distrustful of the French, opted to negotiate separately with the British.

During the talks Franklin demanded that Britain hand over Canada to the United States. This did not come to pass, but America did gain enough new territory south of the Canadian border to double its size. The United States also successfully negotiated for important fishing rights in Canadian waters and agreed, among other things, not to prevent British creditors from attempting to recover debts owed to them. Two months later, the key details had been hammered out and on November 30, 1782, the United States and Britain signed the preliminary articles of the treaty. France signed its own preliminary peace agreement with Britain on January 20, 1783, and then in September of that year, the final treaty was signed by all three nations and Spain. The Treaty of Paris was ratified by the Continental Congress on January 14, 1784.
.
The Treaty of Paris 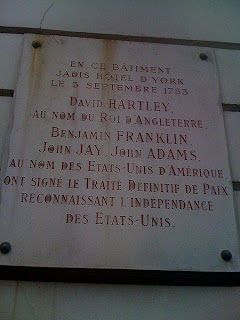 The Treaty of Paris, signed on September 3, 1783, ratified by the Congress of the Confederation on January 14, 1784, and by the King of Great Britain on April 9, 1784 (the ratification documents were exchanged in Paris on May 12, 1784), formally ended the American Revolutionary War between the Kingdom of Great Britain and the United States of America, which had rebelled against British rule. The other combatant nations, France, Spain and the Dutch Republic had separate agreements; for details of these, and the negotiations which produced all four treaties, see Peace of Paris (1783). [2]
.
Astrology of peaceful recognition 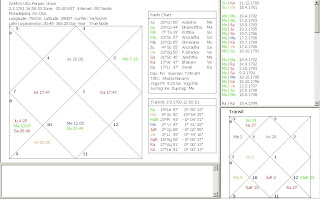 The Moon major period began on April 18, 1782 and it ran for 10 years. This period placed the emphasis on the 1st lord of self in the SAMVA USA chart. As Moon is exalted at 7° 19' Taurus and 11th house, this placement finds the self of the nation being expressed in the house having to do with hopes, wishes and ideals - as well as incomes and friendships. When the Treaty of Paris was signed, the Mars sub-period had begun, lasting from February 17, 1783 to September 17, 1783. As Mars is 10th lord of career as well as being lord of the government, the prominence of these things was evident during the six month sub-period. More than that, as the 10th lord Mars is in mutual aspect with natal Moon as 1st lord, and with both the 1st and 10th houses linked to fame, this period gave the USA increased fame.

For lack of information it is assumed the Treaty of Paris was signed at 2:00 PM on September 3, 1783 in Paris, France. The transits at that time look impressive indeed. Notably, transit 2nd lord Sun at 19° 57' Leo and 2nd house is exactly conjunct the Most Effective Point of the house, highlighting the status of the new nation, the USA. By comparison, had the signing taken place at 3:00 PM the Sun would have been at 19° 59' Leo. Interestingly, the Sun was also so auspiciously placed at the swearing in of George Washington as the first President under the US Constitution. It was at that time the country became a fully fledged Republic. In this regard, a distinction needs to be made between nationhood as defined by the Perpetual Union established in 1781 and the form of government, which was altered in 1789, with the new Constitution. Another aspect of note at the signing of the Treaty of Paris concerned transit debilitated 1st lord Moon was at 9° 50' Scorpio and 5th house, where it was exactly conjunct natal 10th lord Mars at 10° 07'. The major and sub-period lords were thus conjoined during the auspicious event. It could also be noted that transit 10th lord Mars was in retrograde motion at 23° 43' Pisces and 9th house of foreign countries and luck and thus in the MEP of this house, from where it aspected the 12th house of foreign countries, 3rd house of action and courage and 4th house of communal harmony. What is interesting that, aside from transit Saturn as 8th lord of obstacles and endings at 15° 08' Sagittarius and 6th house of conflict under aspect of natal Rahu at 17° 47' Aries in the 10th house of government and foreign trade, there were no afflicting aspects to speak of in the chart at that time.

When the Treaty of Paris was ratified in the early 1784, the Rahu sub-period had begun (September 17, 1783 - March 18, 1785). George Washington said that these were treacherous times and that great care was needed for the USA not to get involved in other foreign conflicts, while it developed and gathered strength. Indeed, the country was fortunate to see the major periods of strong and mutually aspecting planets Moon and Mars running consecutively through the remainder of the 18th century. This was generally a time of progressive development at home as the governing infrastructure of the country was developed and its capacity to defend itself improved. Similar trends are seen in the nascent European Union of today as well as the People's Republic of China.

In sum, the period and transit influences corroborate quite precisely the events during the early years of the nation.