Whither the house system? 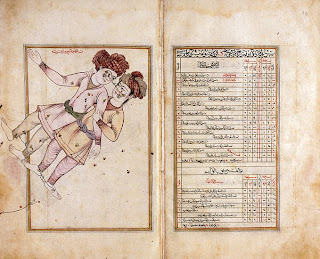 The whole sign house system, which has been used in Vedic astrology for thousands of years, was also used by Arabic astrologers as late as the 8th and 9th centuries AD. After Rome fell and Europe descended into the Dark Ages, the practice of astrology was lost in Europe, not least due to its active suppression by the Catholic Church from the 4th century. When astrology was rediscovered in Europe, more than five hundred years later, it was undermined by a lack of epistemic continuity. The knowledge was being recovered based on partial information as opposed to a vibrant practice. As the original horoscopic practices were apparently not well known by the new practitioners, the value of the whole sign house system for the correct attribution of planet, sign and house lordships in horoscopic astrology was not fully appreciated. Further, the recovery of this knowledge was being compounded by poor translations of early Greek texts from Arabic translations. 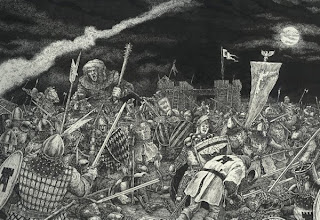 The Dark Ages was a period of chaos, destruction and rebuilding in Europe. It is generally thought to have started with the fall of the Roman Empire in the 5th Century (AD 476). The period ended with the appearance of stable Germanic kingdoms and the development of knights in the 9th Century (AD 800), giving rise to the Medieval Period and a cultural renaissance in Europe. 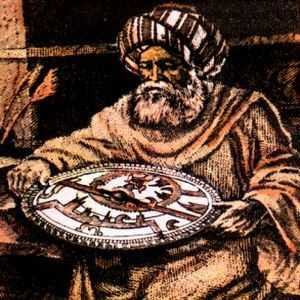 The role of Arabs in the culturual rebirth of Europe after the Dark Ages is widely understood. Astrology was likely brought to medieval Europe by the Moors at the close of the Dark Ages. This was a time when Islam had spread along the North African coast and across the Pillars of Hercules into Spain. The invasion of the "infidels" aroused a mighty reaction in the Christian kingdoms of France and Spain. Coming to the aid of Spanish kings, the king of the Francs, Charlemagne, helped stop the Islamic advance in Northern Spain in 801 AD. However, he could not expel them from the Iberian Peninsula and this became the task of the Catholic Church and the people of Spain during the ensuing centuries. Nevertheless, it appears that astrology had arrived with the Moors in Spain, and well before French and English warriors launched the Crusades in the 11th century with the blessings of the church.

The way in which Astrology was recovered in Europe in the Middle Ages is not known, but it was likely based on a translation of the work of Ptolemy from Arabic. Moreover, it seems the practice of using whole sign houses was abandoned at that juncture, with an unequal house system emerging in its place. This raises the legitimate question of what it was that changed the practices. According to Rob Hand of Project Hindsight it appears it was either a case of a mistranslation or misinterpretation of Ptolemy's 2nd century AD book, the Tetrabiblos. This shift is brought out in the following passage from The Horoscopic Astrology Blog.

"Early Arabic era astrologers working in Baghdad in the 8th and early 9th centuries such as Masha’allah and Abu ‘Ali al-Khayat used whole sign houses in their chart delineations. Then, at some point in the middle of the 9th century something changed and all of a sudden the quadrant style systems of house division started to be used topically, and this usage completely displaced the use of whole sign houses. [1]

According to Rob Hand, this shift "began with the commentators on Ptolemy.[2] It seems the translations at the time caused the confusion. This fact has been established with careful translations of Ptolemy's original work. The original shows no such confusion. Ptolemy, like the practitioners of his day, used whole sign house system. However, the emerging breed of astrologers medieval Europe could not know this. Based on a mistaken interpretation of Ptolemy’s poorly translated work they adopted a house system that was unequal and overlapped the signs. This had major adverse ramifications for the development of horoscopic astrology in the West.

According to Wikipedia, "as a general rule, medieval and Renaissance astrologers did not give themselves the trouble of reading the stars, but contented themselves with telling fortunes by faces. They practised chiromancy (also known as palmistry), and relied on afterwards drawing a horoscope to suit."[3] Moreover, rather than developing into a science of prediction, Western astrology became a complement to scientific advances in astronomy, before being shunted aside as superstition during the Age of Enlightenment.

Auspiciously, the practice of an authentic form of horoscopic astrology survived in Vedic astrology and more importantly is now helping to correct the mistaken foundations of Western astrology.

However, more is need to address the general lack of predictive efficacy using Western astrology and its methods. While fine Western astrologers are able to make correct predictions, with an emphasis on planetary aspects, experience shows that it is generally less effective in prediction of the nature and timing of events than the horoscopic astrology of the Vedas. The key argument to explain this is that the tropical zodiac, as a basis of Western astrology, is also a historical mistake and essentially wrong. Importantly, due to an excessive emphasis on the sun sign at the expense of the rising sign and along with the overlapping and complicated house divisions, Western astrology lacks an effective horoscopic astrology, based on the whole-sign house system and a proper attribution of sign and planet rulership by house. Additionally, there is an excessive use of outer solar system bodies which clouds the assessment. The indiscriminate use of aspects and a general lack of appreciation for the important role of prediction in astrology, linked to the ongoing failures to predict with Western astrology, has failed to establish a scientific basis for astrology, and caused it to be shunned and deplored in scientific circles. Importantly, given this state of affairs, those trained in Western astrology labour at a disadvantage compared to Vedic astrologers in making accurate predictions and correctly interpreting horoscopes. We can only hope that astrology of the 21st century in the West will soon be reformed on the basis of first and best principles and that its delayed real renaissance in the West is at hand at last.

Hello and thank you for inviting me to your blog. We had had some short discussions on the history of astrology and as this post is broadly on this subject, I would like to make comment.

Diocletian in 285 began the process of dividing the Roman empire into eastern and western components, so that when the western empire ended, the East survived into the 15th century. One may therefore consider what
Greco-Roman knowledge, including that of astrology, may have remained within the Levant until then.

In the Greco-Roman period, knowledge of astrology was ascribed to the Chaldeans - I think we may describe this as broadly Mesopotamian.

The region of Greco-India - today Afghanistan, Pakistan, Kashmir and at times, principalities across the Himalayas, was culturally within the orbit of the Hellenistic world from the time of the first Macedonian conquest in the 4th century BCE, until the Arab conquests. This is true regardless of other invasions in the meantime, by other peoples - the Kushans, for example.

Greco-India cannot, therefore, be divorced from the Hellenistic cultures of the Levant during this long period.

At History Hunters International, we have coined the term Panhellenism to describe this culture, for it stretches from Greco-India, into the Greco-Roman world and during the period of the Roman empire, one may expect to find artefactual evidences of this even in Roman Britain. And we do.

Although components of this panhellenic world were conquered by different peoples at different times - and sometimes reconquered - from the time of the first Macedonian conquest until the fall of the Byzantine empire in the 15th century - almost two millennia in all - all the dominions of the panhellenic world will share much culturally.

Thanks Philo, for the valued insights. Indeed, this is still something of a puzzle, how astrology reemerged in the Western part of Europe during the middle ages. The principle question is if it came from the East or from the Arabs? With regard to the story on the house system, an integral part is the culturual shift from a warrior culture of the Roman Empire toan intellectual culture of the Dark Ages, where the Church played a dominant role and actively suppressed heretical ideas, such as astrology had by then become to be considered. This would have been case in the Eastern part of the empire as well. It seems that it was only after the fedual structure of Europe had gained preeminence over the Church that the oppressive dogmas of the Church began to be lifted. Sometime during the early or late middle ages, these formerly heretical practices then began to emerge again. The circumstantial evidence points to it having been based on a recovery of the knowledge from fragments of the earlier vibrant practices in the Hellenic world, via the Arabs. As the shift in the house system is linked to the Arabs as well. Interestingly, the intellectual climate in early Islam, also in Europe from the 8th century, seems to have been much more tolerant towards astrology, considering it as an integral part of astronomy.