In Vedic astrology, the Moon’s nodes, Rahu and Ketu, are functional malefic planets. Wherever they exert their influence in the horoscope, a strain or damage may result. Rahu is associated with things that obscure or poison, like smoke and pollution. Ketu is associated with sudden, explosive events that remove things from the life.
.
In a karmic sense, these planets serve a spiritual purpose. By propelling some towards selfishness and materiality that usually ends in crisis, Rahu brings people around to a deeper meaning in life. By suddenly removing cherished things, Ketu brings isolation or separation, that is usually followed by a profound spiritual understanding. These karmic energies also are felt at the mundane level, in the national affairs. As per the SAMVA USA chart, Rahu can be a source of manipulation in government while Ketu can trigger bouts of social disharmony, due to some ethnic, racial or economic group feeling or being excluded.
.
Major oil spill 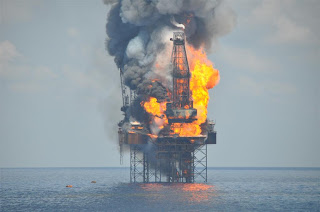 At the present time in the 20° Cancer rising SAMVA USA chart, transit FM Rahu is at 20° Sagittarius and thus exactly conjunct the most effective point of the 6th house, which rules e.g. accidents. On April 22, 2010, a major fire broke out at an oil rig in the Gulf of Mexico, killing eleven workers and injuring others. Soon afterwards, the oil rig sank, raising concerns of a major oil spill. [1] The oil slick in the Gulf of Mexico is now estimated to stretch over 80 miles, threatening to become one of the largest pollution disasters on the shores of the USA in decades. On April 29, a State of Emergency was declared as the oil spill neared the coasts of Louisiana and Mississippi.[2] There is an additional influence coming from Saturn, which rules things mined deep from the ground, and as 8th lord of obstacles and endings. Transit Saturn is now at 4° 39' Virgo and 3rd house, from where it exactly aspects natal 6th lord Jupiter at 4° 25' Scorpio and 5th house. This adds to the karmic tendency for accidents or violent events. Moreover, the location of transit Rahu in the 6th house of Jupiter adds complications to the initial accident at the oil rig. This development is in line with a prediction made at the turn of the year:

"Some violent events - natural or man made - are thus likely to take place during the summer." 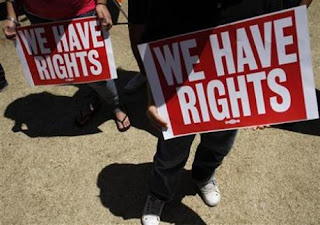 At the same time, transit Ketu is at 20° Gemini in the most effective point of the 12th house, where it is exactly aspecting the 4th house of social harmony, and closely aspecting natal Ketu in the MEP of the 4th house. This is leading to ethnic or racial discrimination issues coming back to the fore of the national discourse.[3] In response to the State of Arizona tightening rules concerning illegal immigrants, the Hispanic community is now planning a major protest at the May day celebrations this coming weekend. These developments are in line with another prediction made for this time:

"A contentious racial or ethnic issue could also explode on the scene."

Summer of 2010
Looking ahead, the nodes will shortly become stationary around 18° Sagittarius and Gemini. From there, they are still within the MEPs of the 6th and 12th houses and exactly aspect their natal counterparts in the 10th and 4th houses. Such or more challenging situations are expected to bring increased strain on the collective harmony. More so, as discussed before, these contacts in the SAMVA USA chart are accompanied by a stressful Jupiter-Saturn opposition. All these transits combined are expected to produce difficulty in the national life this summer.